Jim Corbett was established as a national park in 1936 and was designated as a tiger reserve in 1971. In 2009, it was notified as a critical tiger habitat. The forest area in and around Jim Corbett is inhabited by the Van Gujjars, a nomadic tribe. There are about 20 villages in the buffer zone of the reserve and 70 villages located within five kilometres of the buffer zone. Since 1995, entire villages have been displaced in the name of tiger conservation.
Since the implementation of the Forest Rights Act (FRA), 2006, the people living in and around the park have been demanding recognition of their forest rights. However, the state government has denied rights to the forest dwellers. This is in part because Uttarakhand does not recognise the Van Gujjars as a Scheduled Tribe (ST), thereby making the process of claiming their rights under the FRA even more difficult.
In May 2015, officials of the forest department entered Tumadiya Khatta, a village situated in Ramnagar on the fringes of the park, and destroyed the huts and crops of the forest dwellers and assaulted women.
In December 2016, the Uttarakhand high court declared Jim Corbett as an eco-sensitive zone, ordering the immediate evacuation of the Van Gujjars living within a 10-kilometre radius. The same year, the National Green Tribunal ordered the eviction of 800 people from the core park area.
In 2018, the court further ordered the eviction of 57 families. Noting that "the state government cannot give a premium on dishonesty", the court in its order said, “Rehabilitation policies are primarily meant for those persons who are displaced by way of compulsory acquisition of their land for public projects or due to natural calamities. How the state government is contemplating the rehabilitation policy for persons who have encroached upon forestland, with impunity, is beyond our comprehension”. The order was put on halt due to the petition of activist Tarun Joshi from the All India Union of Forest Working People. But there was no rehabilitation of those who were evicted following the 2016 order.
In February 2019, the Supreme Court ruled that forest-dwelling communities whose FRA claims have been rejected must be removed and resettled outside the parks.
The Van Gujjars are currently fighting for an ST status that will enable them to claim their rights over forestland. While the Van Gujjars are recognised as ST in Himachal Pradesh and Jammu and Kashmir, Uttarakhand does not extend the same rights to them as the state recognises the Van Gujjars as Other Backward Class. Without a formal legal status and recognition by the state, the social and economic development of the Van Gujjars has been left to the forest department, whose other role involves enforcing restricted access to protected areas.
On August 17, 2020, the Uttarakhand high court asked the state government to set up a committee within six weeks to look into the problems faced by the Van Gujjars. This was after a PIL was filed by a non-profit, Think Act Rise Foundation, which said that the community lacks basic rights and is often forcefully evicted. The committee was formed on October 20, 2020, comprising the principal chief conservator of forests and wildlife of Uttarakhand, the state chief wildlife warden, field director of Rajaji Tiger Reserve, a person nominated by the Wildlife Institute of India and a person nominated by the World Wildlife Fund. The committee is expected to submit a report within six months.

In 2018, the Uttararakhand high court held that the Van Gujjars were a threat to wildlife and that the state government's proposal to rehabilitate them was against public policy. It noted that rehabilitation policies are meant to be directed towards those who are compulsorily displaced or who lose their land due to natural calamities and, thus, the Van Gujjars are not entitled to such rehabilitation as they are encroachers. However, in 2020, the court observed that the Van Gujjars have rights in law that need to be protected and that they not only require legal protection but should benefit from the law as well. In this spirit, it directed the state to constitute a committee to help the Van Gujjars. It ordered the additional advocate general to submit a proposal regarding the constitution and scope of the committee and the extent to which an inquiry would be done by the committee.

In May 2015, forest department officials entered Tumadiya Khatta, a village situated in Ramnagar area, on the fringe of the park. They destroyed the huts and crops of the forest dwellers and assaulted women.

Involvement of national and international NGOs 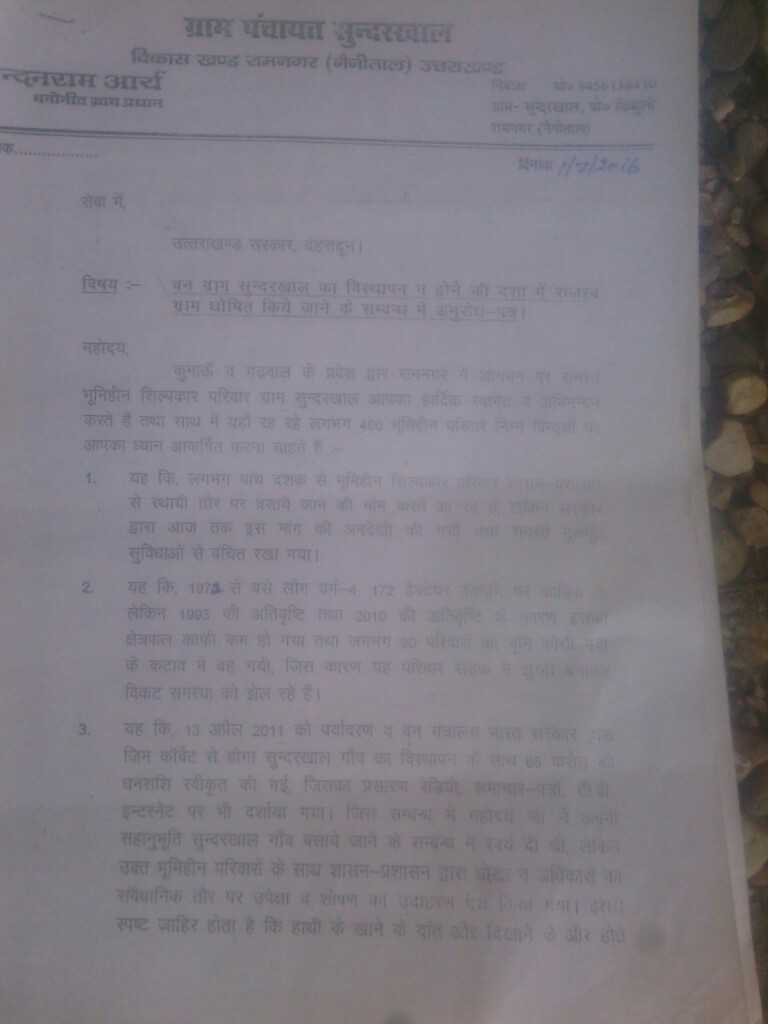