Nearly two decades after it was proposed, the Indiabased Neutrino Observatory (INO) project the most expensive basic science experiment proposed in the country at an estimated cost of INR 1,500 crore is yet to take off.  After overcoming a series of litigations, the INO project seemed to have overcome its hurdles in December 2020 when the Union government notified an area of zero to one kilometre around the boundary of the Mathikettan Shola National Park in Kerala as an ecosensitive zone (ESZ), effectively placing the INO project site at Pottipuram panchayat in Tamil Nadus Theni district outside the ESZ. The national park is located near the Tamil NaduKerala border. But the project has now met with another bottleneck. During a meeting on February 17, 2021, the Tamil Nadu forest department reportedly informed the Department of Atomic Energy, the funding agency, that the project site falls in the MathikettanPeriyar tiger corridor. The Tata Institute of Fundamental Research, the project proponent and one among the consortium of 21 institutes involved in the project, was then required to apply for wildlife clearance, which is yet to be examined by the State Board for Wild Life. Speaking to LCW, Chief Wildlife Warden Shekhar Kumar Niraj confirmed that the project site falls in the tiger corridor. This brings the state and national boards for wildlife into the picture. Based on their recommendations and the existing laws and policies, the environment ministry will decide on the future course of action. Meanwhile, INO Project Director Gobinda Majumder, in a press release, said that the project would not affect the tiger corridor as the tunnel would be constructed several metres underground. The surface facilities are purely restricted to the 26.82 hectares of revenue land, and they lie completely outside the adjoining reserve forest. Of the 4.62 hectares of underground construction, it is clarified that the tunnel entrance (portal) begins in the revenue land and the horizontal tunnel gets several metres deep before it enters the forest land, he explained.  D. Indumathi of the Institute of Mathematical Sciences, who is also a member of the INO Scientific Management Board, told LCW that not even an inch of the tiger corridor would be occupied as the portal to enter the tunnel would start well outside the corridor on government land.  Meanwhile, Tamil Nadu Chief Minister M.K. Stalin, who has always opposed the project, submitted a memorandum to Prime Minister Narendra Modi on June 17, 2021, listing a number of demands, including the scrapping of the project. Earlier in 2019, the Marumalarchi Dravida Munnetra Kazhagam (MDMK), an alliance partner of the ruling Dravida Munnetra Kazhagam, had launched a campaign against the project. Stalin, who was then the Leader of Opposition, had flagged off a protest rally of the MDMK. The residents of Pottipuram panchayat have expressed fear that they would be alienated from the pastoral lands and Ambarappar hill, which they consider their deity. They have also raised concerns about the project utilising 3.5 lakh litres of water per day from the Mullaperiyar Dam. Responding to the grievances, Dr. Indumathi had said that the rights of the community outside the fenced land would not be taken away. The water required for the project accounts for just 0.00002 per cent of the annual flow of the Mullaperiyar river, which is equivalent to the demand of 150 families, she further told LCW. The villagers also fear "radiation leaks" from neutrinos. The INO project was granted environmental clearance in March 2018.

Environmental Impact Assessment Notification, 2006
Activity 8(a), Category B [Building and construction of projects]
Forest (Conservation) Act, 1980
Section 2 [Restriction on the state government for dereservation of forests or use of forestland for non-forest purpose]
Wild Life (Protection) Act, 1972
Section 38 O(1)(g) [Ensuring that the tiger reserves and areas linking one protected area or tiger reserve with another protected area or tiger reserve are not diverted for ecologically unsustainable uses, except in public interest and with the approval of the National Board for Wild Life and on the advice of the National Tiger Conservation Authority]

Speaking to LCW, Chief Wildlife Warden Shekhar Kumar Niraj confirmed that the project site falls in the tiger corridor. “This brings the state and national boards for wildlife into the picture. Based on their recommendations and the existing laws and policies, the environment ministry will decide on the future course of action.” 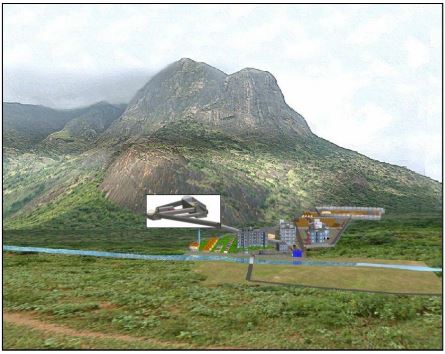