The Kutch Camel Breeders Association (KCBA) filed a petition in 2017 with the National Green Tribunal (NGT) alleging that mangrove forests along coastal Gujarat were being cleared in a rampant manner by the authorities in violation of the provisions of the Coastal Regulation Zone Notification of 2011. The petition says that the destruction of mangroves not only violates the Forest (Conservation) Act, 1980, but also deprives the indigenous Kharai camel species of its major food source, thereby affecting the livelihoods of several hundred camel breeders in the region. Breeders from Bhachau to Gandhidham, who together own about 700 camels, alleged that food for the camels has become scarce. Kharai camel is a unique breed of camel found only in Kutch, which can swim in seawater and survives on mangroves. According to news reports, KCBA President Bhikhabhai Rabari claims that salt pan leaseholders have blocked the creek in the Gulf of Kutch to produce salt and, as a result, mangroves have been devoid of seawater, which is essential for their survival. He alleges that the leaseholders used to work outside the creek area earlier but they now produce salt inside the creek where dense mangroves are present. On March 19, 2018, the NGT issued showcause notices to the Ministry of Environment, Forest and Climate Change (MoEFCC), the Gujarat Coastal Zone Management Authority (GCZMA) and the State Forest Department. However, despite the NGT's order and cancellation of lease by the Kutch district collector, work on salt pans continues inside the creek. On April 7, 2018, the camel breeders submitted a memorandum to the Deendayal Port Trust against salt production and leasing of salt pans. On August 1 that year, the NGT ordered the Gujarat Pollution Control Board to reopen the tidal creek, which had been sealed off by the salt companies, so that seawater could reach the mangroves and prevent further damage. In September 2019, the NGT ordered the authorities to find those responsible for the degradation of the mangroves and levy environmental charges on them for their restoration.  Earlier in 2020, the KCBA had filed a plea alleging that the Deen Dayal Port Trust had not executed the order of the NGT to protect mangroves from destruction. In September, the NGT asked the MoEFCC and the Gujarat government to recover the fine from violators. About 600 kilometres away, Aliya Bet in the delta of the Narmada River would have served as a good source of food for the camels as the area has goodquality grass. But potable water is no longer available there with the building of a dam upstream.

Lack of legal protection over land rights, Violation of environmental laws, Non-implementation/violation of the FRA

Development of a network or collective action , Complaints, petitions, memorandums to officials 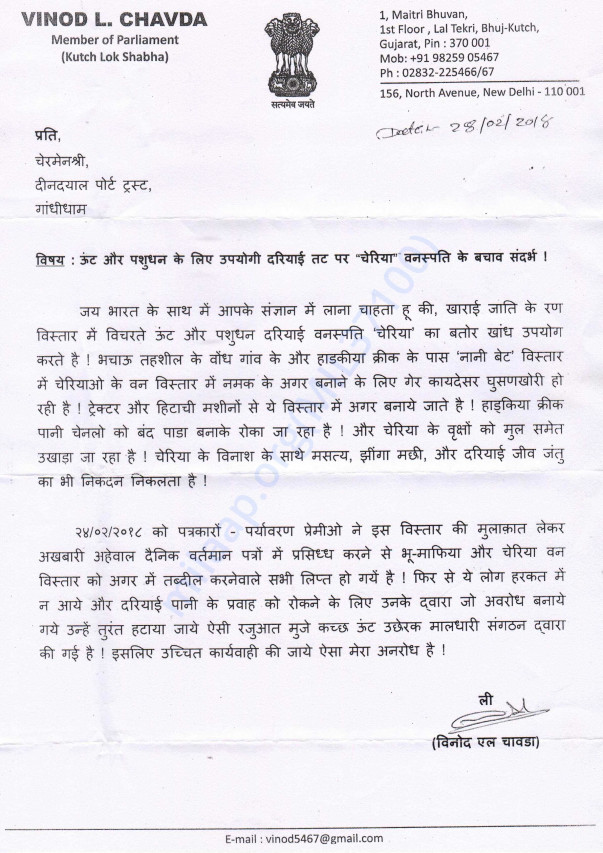