Goa Waste Management Corporation’s (GWMC) proposal to construct a 250 Tonne Per Day (TPD) Solid Waste Management Facility (SWMF) in Bainguinim Village of Goa has led to protests by local communities who are opposing the project.

The Rs. 169.17 Crore project is planned across a 17 Ha. plot which was acquired by the Corporation of City of Panaji in 2008, and handed over to GWMC in 2017, who are responsible for the project's planning and execution. As per its Environment Impact Assessment Report, the project aims to ensure “the scientific processing and disposal of the solid waste by the local bodies in compliance with the Municipal Solid Waste (MSW) Rules, 2016.”

While protest marches attended by thousands of Goa locals against utilising the acquired land for a SWMF were first carried out in 2013, the people’s movement intensified in 2020, when GWMC’s 250 TPD project was granted environmental clearance. Primarily, the opposition to the waste management facility has been due its proximity to several residential complexes cumulatively housing over 1000 apartments, many of whom share a common boundary wall with the project.

The Pornem Goemch Nagrik Monch and Bainguinim Citizens Forum have been leading the movement against the project, with participation of local Congress Party leadership. Speaking to LCW, Silverio Diaz, Secretary, Bainguinim Citizens Forum stated: “The proposed land is in violation of the siting criteria as set out in Solid Waste Management Rules, 2016, the Amended Guidelines on the Provision of Buffer Zone Around Waste Processing and Disposal Facilities, 2019. Further, even if the facility uses the best technology for processing waste, we fear that for a 250 TPD plant there will be a long line of trucks carrying wet waste from various locations.The plant and its premises will turn into a breeding ground for vermin, pests and other disease causing vectors which will pose a greater threat to the lives of people within the proximity of the proposed land.”

The citizens’ key demand is to shift the project from its current location as they fear adverse health impacts for those living in residential apartments that are located close to the project site. Citizens also fear that the stench of garbage will adversely impact the children whose school premises are located within 300 metres from the SWMF boundary.

Another major concern of the locals is the damaging effect of a waste management facility on the closely-situated Goan heritage sites, a concern that has been echoed by the Goa Roman Catholic Church as well.

A GWMC official who spoke to LCW on the condition of anonymity, said the project “will not create pollution, (as) it is a waste management plant which is there for the scientific management of waste.”
A petition filed by the Bainguinim Citizens Forum challenging the environmental clearance granted for the SWMF was dismissed by the National Green Tribunal in September 2020. A civil appeal against the NGT order was filed in the Supreme Court in 2021 by Bainguinim Citizens Forum. This case is still pending in the apex Court. But protests have restarted on ground since June 2022.

Demand to relocate the project

Solid Waste Management Rules, 2016
Rule 19(2) [The waste management facility must be designed to follow technical guidelines issued by the Central Pollution Control Board] Schedule I (vii) [Among other criteria for site selection, a landfill must be at least 200 metres from habitations]
Environmental Impact Assessment Notification, 2006
Paragraph 8(vi) [Regulatory Authority may reject the application for prior environmental clearance if they find deliberate concealment of information/ submission of false information] Schedule, Paragraph 7(i) [List of projects requiring prior environmental clearance include waste management facilities]

The Appeal filed against the environmental clearance in the NGT was disposed of by the tribunal on September 24, 2020. The Tribunal accepted the arguments of the project proponent that there was no construction around the site when it had acquired the land in 2006. The Tribunal issued directions merely for the conditions in the environmental clearance to be followed and monitored by the State PCB. An appeal against the NGT order was filed before the Supreme Court in 2021. The case was last heard on April 21, 2022, and will next be heard for final hearing. There is no information given for the next date of hearing.

1. An official of the Goa Waste Management Corporation who spoke to LCW on the condition of anonymity said, “All the necessary design changes have been incorporated. Land was first identified for waste management plant, and residential people have come after that, so the people don’t have a say as such. This plant will not create pollution as it is a waste management plant which is there for the scientific management of waste.” 2. K. Ashok Kumar, Dy. Town Planner, Town and Country Planning Department, Goa Govt. said he “can’t comment” on how the waste management plant is allowed to share boundaries with residential apartments. 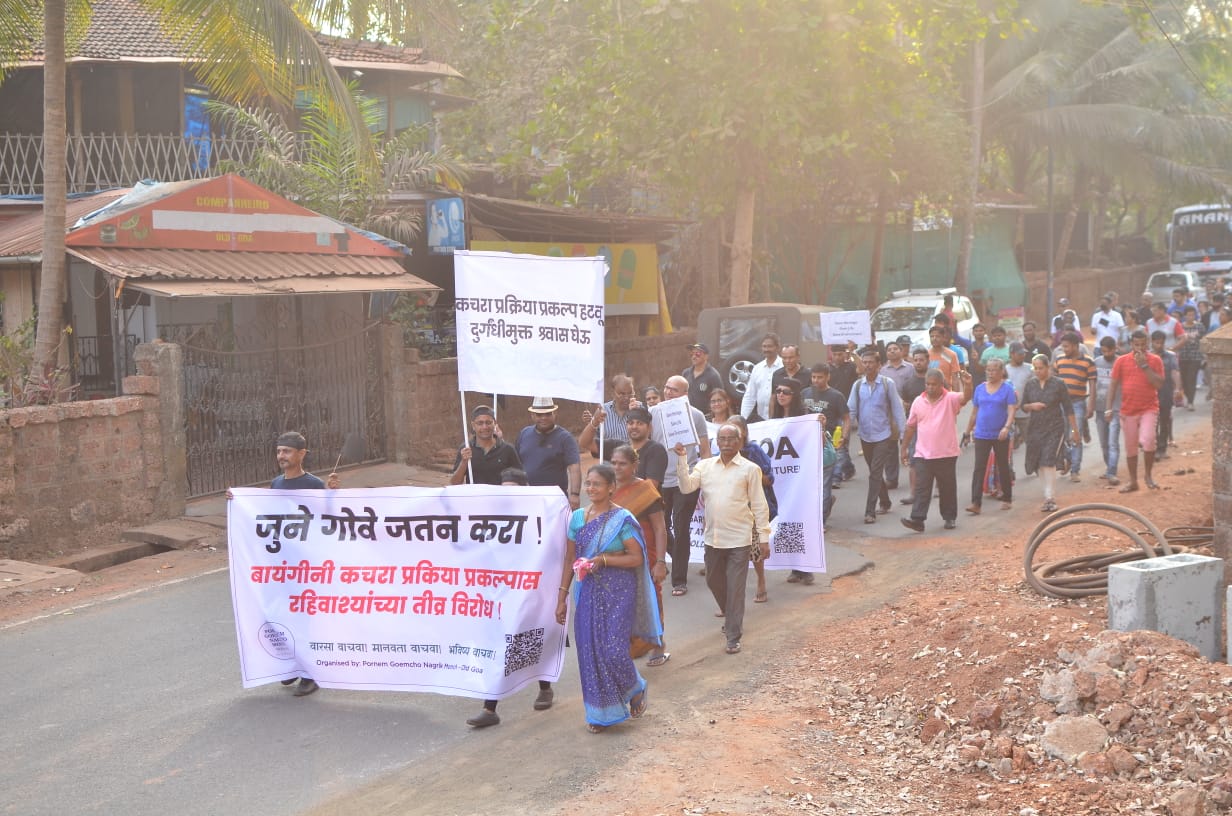