Hindustan Unilever Ltd.'s (HUL) thermometer factory, was in the news again for the mercury waste it had disposed off in 2001 in Kodaikanal. Set up in the 1980s, the factory was forced to shut down in 2001. The factory had dumped mercury filled glass thermometers in the scrapyard in Kodaikanal and the nearby watershed forest, causing soil and water pollution in the area. Activists alleged that the mercury pollution caused by the now defunct factory unit led to deaths of at least 45 factory workers and 12 children. In 2003, the company exported nearly 300 tonnes of dumped mercury waste from Kodaikanal to the US for recycling.

But the company provided no relief to its workers who reported ailments including kidney failure, heart ailments, skin allergy, etc. Instead, HUL denied having caused such a massive scale of pollution, citing studies conducted by different technical experts to argue that mercury did not cause any negative impact on workers' health. Despite the denials by HUL, a study by the Department of Atomic Energy in 2016 found mercury levels in the area to be 11 times more than the standard set by the United States Environment Protection agency and nearly 20 times higher than Canadian safety standards. Following a 15 year old campaign led by the ex-workers of HUL's Kodaikanal factory unit, the Madras High Court issued an order in 2016, directing HUL to provide compensation to the families affected by the mercury pollution caused by the factory. In 2016, the company provided ex-gratia compensation to 591 former workers/association members and their families.

HUL's Kodaikanal unit resurfaced in the news in 2021 after it felled more than 300 trees in its now defunct factory, which lies next to the Kodaikanal Wildlife Sanctuary. The tree felling by HUL was carried out in 2020 as part of its activities for soil remediation or clean-up. Activists in the area opposed the tree felling on the ground that HUL did not have the required clearances for felling trees. It is also feared that clearing trees might cause mercury contamination in the nearby Pambar-Shola forest, and the perennial Pambar river, which is half a kilometre from there.

In April 2022, the National Green Tribunal (NGT) ruled that there were no violations in the bio-remediation for mercury contamination carried out by Unilever in Kodaikanal, which involved felling of trees. Taking note of the matter on a suo motu basis, the NGT declared that HUL had the necessary permissions from the Central and Tamil Nadu Pollution Control Boards for conducting its bioremediation activities.

Nityanand Jayaraman, an environmental activist who has been fighting against the mercury pollution by Unilever, told LCW that the judgement had missed the point raised by the respondent. “It has not gone into our allegation of the washing away of mercury into Pambar Shola. Further, the Chief Wildlife Warden did not authorise the clear-felling of trees which were located inside the Kodaikanal Wildlife Sanctuary.” He further said that activists were examining the possibility of further appeal against the verdict, but it was unlikely.

Water (Prevention and Control of Pollution) Act, 1974
Section 25 [Prior consent of the State Pollution Control Board is necessary to establish any industry which is likely to discharge sewage]
Hazardous Waste Management Rules, 2016
Rule 3(17) [Hazardous waste includes any waste likely to cause danger to health or environment.] Schedule II [Mercury beyond a certain limit considered hazardous waste] Rule 6 [Requirement to obtain clearance from State Pollution Control Board to receive authorization for managing hazardous waste]
Air (Prevention & Control of Pollution) Act, 1981
Schedule VI [General standards for discharge of environmental pollutants]
Environment Protection Rules, 1986
Schedule VI [General standards for discharge of environmental pollutants]
Tamil Nadu Hill Area (Preservation of Trees) Act, 1955
Section 2A [State Government may constitute a committee for each hill area for the purposes of this Act] Section 3(1) [Cutting of trees prohibited without prior permission in writing of the committee]
Wild Life (Protection) Act, 1972
Section 28 [Chief Wildlife Warden may grant permit to any person to enter or reside in a sanctuary for purposes such as investigation, scientific research or transaction of lawful business]

The NGT (Southern Bench) had recognized the case suo motu on the basis of a newspaper report. On April 19, 2022, it disposed of the case through the final judgment. The Tribunal directed Hindustan Unilever Limited (HUL) to carry out the remediation process strictly in accordance with the directions made by the CPCB and TNPCB. These agencies may also direct HUL to conduct further studies and shall monitor the remediation process. The Tribunal had earlier observed on August 31, 2021, that the Project Proponent had to ensure that a minimum of 10 trees are planted for each tree which is cut. This was reaffirmed through a direction in the final judgment. 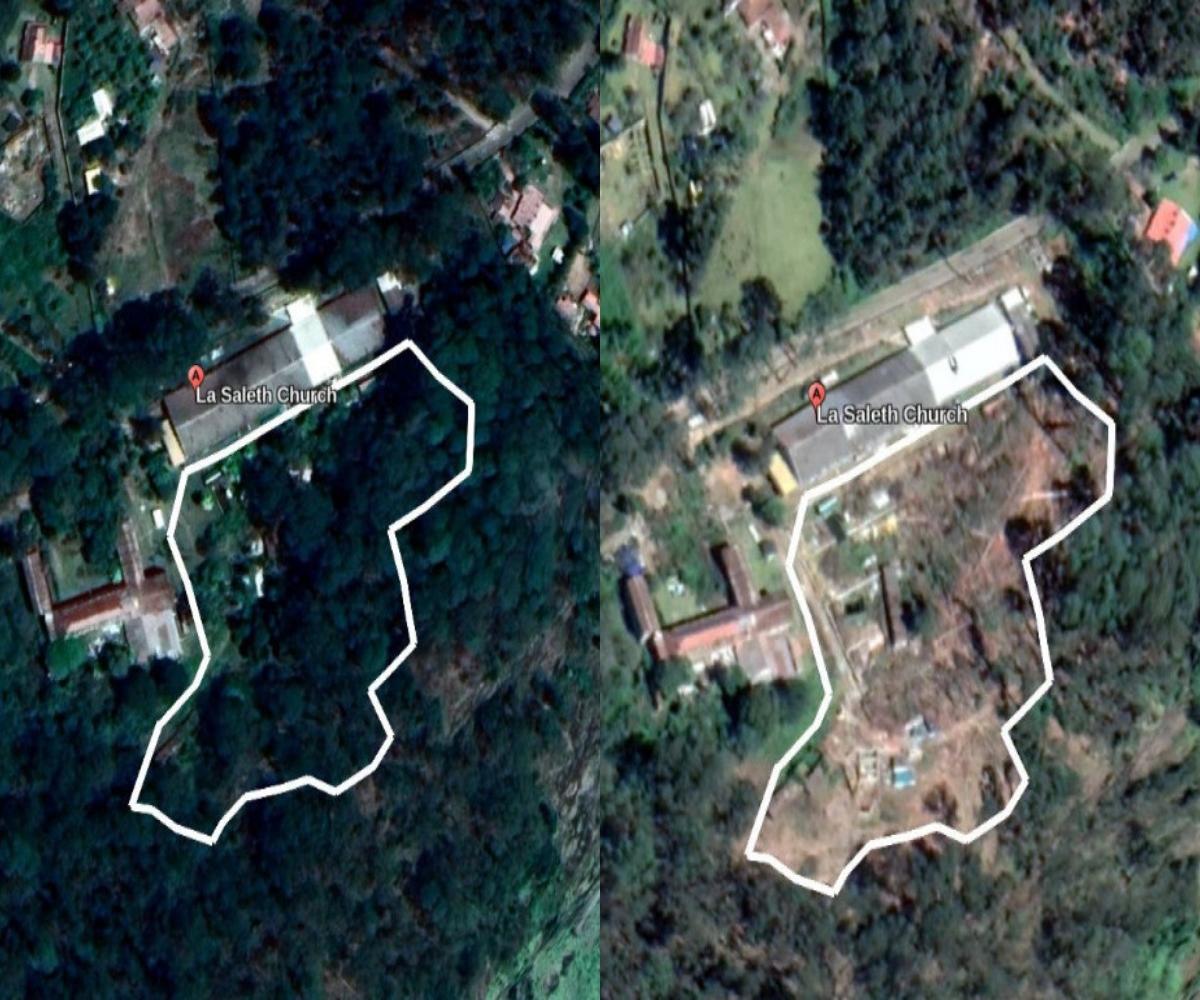 A satellite image showing the clear-felling of trees by Unilever.

A song released by Jhatkaa highlighting the environmental pollution by Unilever in Kodaikanal.