The Sterlite Copper plant was established in Tamil Nadu's Thoothukudi district by Sterlite Industries (India) Limited, a subsidiary of the London-based mining giant Vedanta, in 1994.

Prior to the setting up of the plant in Thoothukudi, the Maharashtra Industrial Development Corporation had allotted 500 acres of land to the company in 1992 to set up a copper smelting plant at Maharashtra's Ratnagiri district. However, following a year-long protest by residents of the area, the then district collector wrote to the company in July 1993, instructing them to suspend construction work.

The project was shifted to Tamil Nadu in 1994-95, after the Ministry of Environment and Forests gave environment clearance for the same in January 1995, without waiting for the Environment Impact Assessment. In 1996, the plant commenced operations after the Tamil Nadu Pollution Control Board issued it the licence to operate.

Since then, despite public opposition and legal challenges, the plant has been allowed to function without complying with air and water pollution norms. This has impacted the residents of Thoothukudi district in Tamil Nadu. Instances of environmental pollution caused by the plant date back to 1997, when 165 women working in a neighbouring factory fainted simultaneously due to sulphur dioxide poisoning from Sterlite Copper. Another toxic gas leak occurred in 2013 when emissions from the plant were at least double the permissible level. Also, at least 17 workers in the plant have died so far due to hazardous and negligent working conditions, while many more have been gravely injured. Several soil and water samples that have been collected from around the plant have been found to be heavily contaminated and toxic. However, the district administration and the TNPCB continued to defend the company and gave them the clean chit despite multiple protests from the public.

Protests against the plant intensified in April 2018 when a worker, who was maimed at the plant, attempted self-immolation and yet another individual in Thoothukudi died of cancer. The same year, protests intensified as people gathered to oppose Sterlite's proposed expansion, which they stated to be in violation of several land and environmental regulations. Protesters decided to march to the District Collector's office to mark their 100th day of protest. It is reported that the workers and officials of the plant were aware of the planned protest, but the district administration in Thoothukudi imposed Section 144 in the area on the eve of the protests and opened fire on the crowd when they reached the District Collector's office.

A People's Inquest has revealed that on May 22-23, 2018, at least 13 people protesting the expansion of the copper smelting plant were killed in police firing, including a 17-year-old. Many were injured. Following this, the Tamil Nadu Government ordered the closure of the plant.
On November 27, a three-member committee formed by the National Green Tribunal (NGT) to probe the closure of the plant termed the closure unjustified and described the move as political. The NGT ordered the reopening of the plant. On February 18, 2019, however, the Supreme Court set aside the NGT's order and refused to allow the reopening of the plant.

On August 18, 2020, the Madras High Court ordered the closure and permanent sealing of Sterlite Copper in Thoothukudi after listing various environmental violations and failures to obtain permissions from the TNPCB. In January 2021, the SC refused to recall its order rejecting an interim plea filed by Vedanta in December 2020.

The Tamil Nadu government allowed Sterlite Copper to reopen for a span of four months in 2021 to produce medical oxygen free of cost. The locals staged protest against the reopening over fear that the unit might begin copper production. Residents from hamlets around the factory submitted petitions to the Tamil Nadu government seeking the reopening of the factory in the hope of finding employment. Fatima Babu, an activist and coordinator of the Anti-Sterlite People's Movement, told LCW the company was trying to create a false image that the people wanted the reopening of the company. "We have been peaceful, but this should not be misconstrued as dampening of spirits. The opposition against the company continues as it was years ago."

In March 2022 the Supreme Court began hearing an appeal filed by Vedanta against a Madras High Court order refusing to reopen the plant. While court hearing is still pending in the matter, Vedanta has also initiated the process of selling the plant by issuing an expression of interest for that purpose in June 2022.

NGT, Appeal No. 87/2018: Order dated December 15, 2018: September 2018: NGT allowed the appeal against the closure of its Sterlite Copper Plant at Thoothukodi. This was allowed after the Inspection Committee submitted that the closure of the Plant was not necessary but listed twenty-five measures that should be followed for better monitoring of environmental parameters. Supreme Court of India, Civil Appeal Nos. 4763-4764 of 2013, Order dated February 18, 2019: The Court set aside the NGT's order on the grounds of maintainability as an appeal would lie to the NGT under the Water Act and Air Act only from an order or decision of the appellate authority. In this case, since no order or decision had been made by the appellate authority under either the Water Act or the Air Act, any direct appeal against an original order to the NGT would be incompetent and NGT has no jurisdiction to hear the same. Madras High Court, Writ Petition No. 5756 of 2019, Order dated August 18, 2020: The High Court ordered the closure and permanent sealing of the plant. It held that there was a violation of various environmental regulations and failures to obtain permissions from the TNPCB. These violations included that the copper unit fell under the ‘red category industry’, and should not have been established inside the industrial park. Vedanta had not complied with green belt requirements and this was the reason to not allow them to operate any more. Vedanta had not disclosed the actual area of land held by them when applying for environmental clearance and it had operated without valid consent for a substantial period. Supreme Court of India, SLP(C) No. 010159 of 2020, Order dated December 02, 2020: Vedanta challenged the Madras High Court's order dated August 18, 2020 and prayed for interim relief to allow for an immediate reopening of its Sterlite copper plant at Thoothukudi for an experimental run for 2, 4 or 6 weeks. However, the Court ruled that the interim relief cannot be granted and dismissed the plea. Supreme Court of India, SLP(C) No. 010159 of 2020, Order dated January 22, 2021: The Court refused to recall its order rejecting Vedanta's interim plea to reopen its Sterlite Copper smelting plant at Thoothukudi, Tamil Nadu till the pendency of the appeal.

In May 22, 2018, the police opened fire at a group of protesters, killing 13 and injuring many others. Many residents in and around the plant are being subjected to harassment - For eg. Young men in the village of Meelavittan near the Sterlite plant were harassed and arrested. 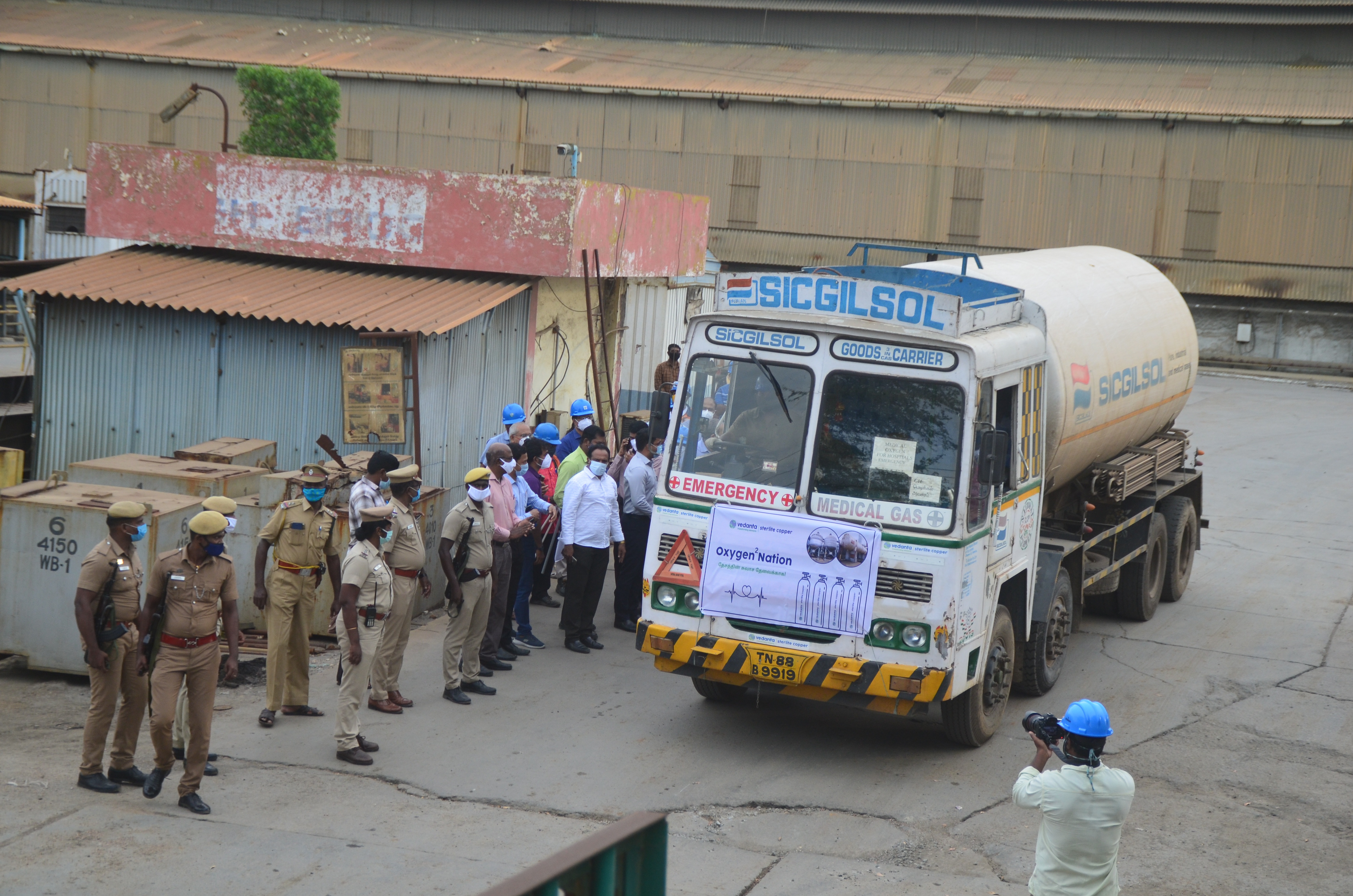 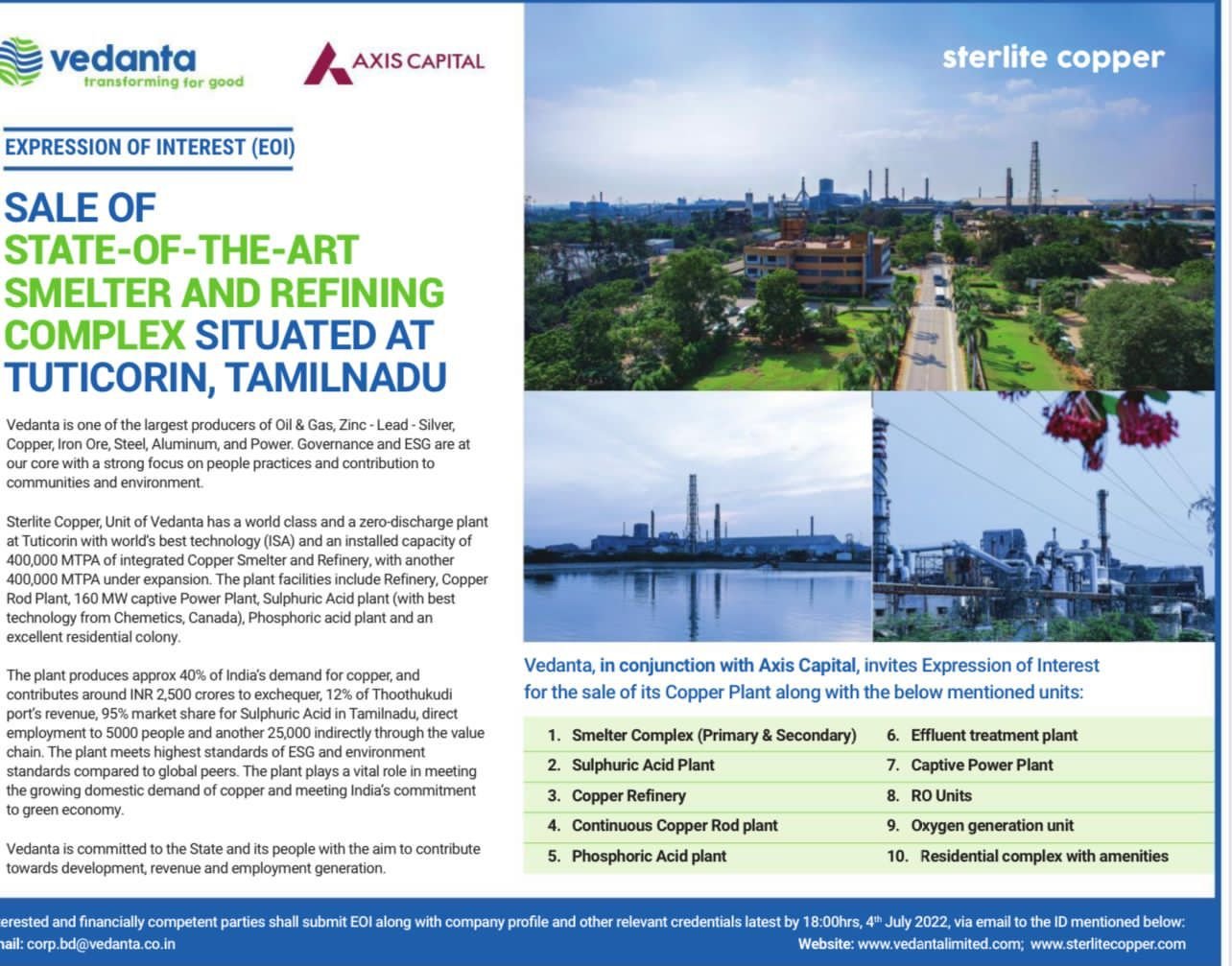