Adani Group has invested INR 53,031 crore in the Kattupalli Port on the outskirts of Chennai to expand its existing capacity. The fisherfolk in the area have opposed the move citing a threat to their livelihood and have demanded scrapping of the project. The Kattupalli Port was initially built and owned by Larsen and Toubro. Adani Ports acquired it in June 2018 and renamed it Adani Katupalli Port Private Limited.

The port has been spilling oil into the sea since it started operations in January 2012. Now, “expansion operations will require further reclamation of the sea, resulting in more oil spill. This will force the fisherfolk to go for deep-sea fishing, which many of them cannot afford. The project will also displace around 33,000 people, and, if the ecosystem is affected, it might pose a threat to Chennai's groundwater as well,” Xavier Benedict told Land Conflict Watch. Benedict works with the AARDE Foundation, which works for the promotion and conservation of wetlands.

According to a news report, thousands of families depend on fishing in the sea and backwaters in the proposed expansion area. They fear that their relocation will affect their livelihood as they would have to spend more time to commute to the seashore.

People and activists have also opposed the port expansion on environmental grounds. The proposed expansion work requires reclamation of 2,000 acres of land inside the sea and its adjoining areas, including Ennore-Pulicat backwaters, which Adani plans to do by dumping dredged sand from the Palar river. The backwaters and wetlands play a pivotal role in protecting their surrounding area from floods. The filling up of these natural bodies will expose most parts of North Chennai and its neighbouring areas to floods.

The Ministry of Environment, Forest and Climate Change granted the Terms of Reference for the expansion of the port in July 2019 after a three-member team appointed by the ministry’s Environment Assessment Committee submitted its report to the Expert Appraisal Committee in June. But the expansion has been in limbo after a public hearing on the proposal was indefinitely postponed owing to Covid-19. The company has not filed a fresh application for a public hearing so far, according to activists.

On January 31, 2022, Pulicat fishers staged a protest seeking permanent jobs at the port as their traditional fishing activities have been badly hit because of the Kamarajar and Adani ports. They also sought the scrapping of the Kattupalli port expansion plan.

Speaking to LCW, environmental activist Nityanand Jayaraman, who has been at the forefront of the campaign against the project, said, "If the government wants to revoke the no- objection certificate, it can do so based on the fact that the coastal area is fast eroding. But why the government has not done this is not clear". 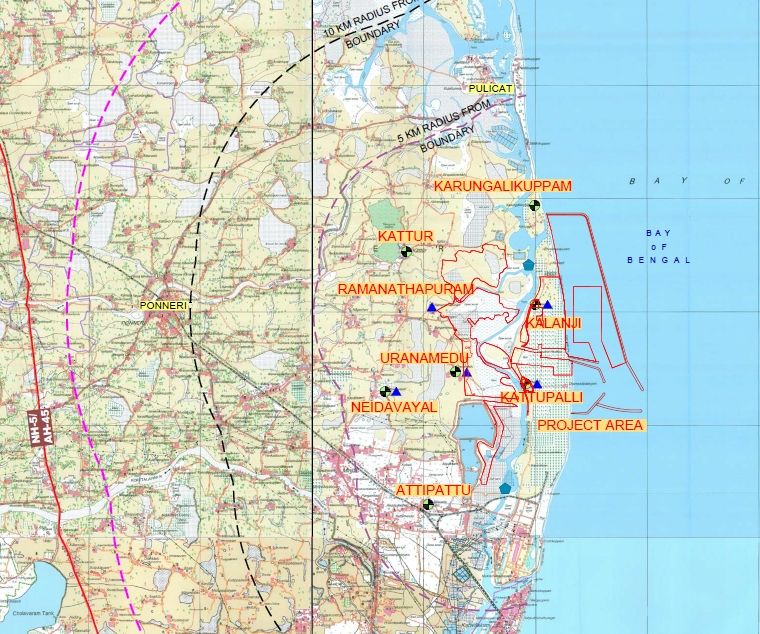