On January 14, 2022, the police in Odisha cracked down on the residents of Dhinkia village in Jagatsinghpur district, resorting to lathicharge and arrests. Clashes began when the police reportedly prevented about a thousand people from inspecting their betel leaf plantations.

According to the Jindal Pratirodh Sangram Samiti (JPSS), at least 30 people were injured, including women and children. The police arrested five members of the group,including their leader, Debendra Swain, and social activist Narendra Mohanty.

LCW spoketo JPSS spokesperson Prashant Paikray, who informed that the police have been guarding the area for more than 45 days, blocking public access to the betel leaf plantations, on which the livelihoods of the residents depend. He alleged that the police had attacked the people three-four times since December and arrested many on multiple occasions.

According to Paikray, the plantations stand on the proposed site for an integrated steel plant by Jindal Steel Works (JSW), which the residents of Dhinkia have been opposing for more than a decade. The JSW plant, which received forest clearance in May 2011, has been proposed on the same location as the earlier POSCO steel project.

On June 22, 2005, the Pohang Steel Company (POSCO) of South Korea had signed a memorandum of understanding with the Odisha government to construct a $12-billion integrated steel plant in Jagatsinghpur. The project required 4,000 acres of land, of which 2,700 acres were forestland. But the public opposed the project as they were at risk of being displaced. The struggle to halt the project lasted for 12 years (during which the JSW Steel Plant was also proposed and received forest clearance). Facing stiff resistance and failing to get an unimpeachable environmental clearance, POSCO finally withdrew the project in 2016.

The local communities, in the meantime, had filed claims for both individual and community forest rights under the Forest Rights Act, 2006, as they traditionally used the land to cultivate betel vines, paddy and vegetables. In addition to demanding the return of their cultivable land after POSCO’s withdrawal, the people also demanded the government to urgently process their forest rights claims. Paikray claims that the government is yet to recognise their rights.

The protests against POSCO’s steel plant have now replicated in the JSW project. A public hearing was organised on December 20, 2019, which was denounced as a ‘farce’ by the residents as the project-affected people reportedly did not participate in the meeting. The village council (palli sabha) of Dhinkia, too, passed a resolution against the project.

Sankar Prasad Pani, an advocate based in the state, told LCW that following the resolution, the Ministry of Environment, Forests and Climate Change issued a letter to the State Pollution Control Board to examine the issues raised.

“The JSW steel project is yet to receive an environmental clearance, but the government, joining hands with the police, has started to cut down trees, destroy our plantations and acquire land. We have clearly stated that we do not want any project in the area. If the government wants to build plants or factories, it will have to do so over our dead bodies. We will not accept any compensation or rehabilitation package. We do not want any project or any Jindal on our land,” Paikray told LCW.

Talking about their pending forest rights claims, he added that during the anti-POSCO struggle, the government had set up three committees to check the implementation of forest rights in the area, but till date their rights remain unrecognised.

The JPSS has reached out to civil society groups and political parties for support. “Our people have been protesting in a non-violent manner, but the police have resorted to force and have also levelled fake charges against us to discredit our stuggle. Even the company’s goons have threatened us, but we are determined to not give up our land. We will continue to protest in a democratic way,” Paikray said.

LCW tried to speak to others who were victims of the police action, but following the arrests of JPSS members, no one was willing to come forward and speak openly. LCW was also told that many people in the village have gone into hiding as the police are allegedly making door-to-door visits to arrest protesters.

Demand to get back acquired land

Scrapping of the steel project

Scheduled Tribes and Other Traditional Forest Dwellers (Recognition of Forest Rights) Act, 2006
Section 3(a) [Right of traditional forest dwellers to hold forest land for common occupation and self-cultivation to be recognized as a Forest Right]; Section 4[Traditional forest dwellers to be vested with all the forest rights recognized under Section 3]
Right to Fair Compensation and Transparency in Land Acquisition, Rehabilitation and Resettlement Act, 2013
Section 101 [Unutilized acquired land to be returned to the original owners by the State Government]; Section 5 [A public hearing should be conducted to ascertain the views of the families affected in an acquisition process]
Odisha Right to Fair Compensation and Transparency in Land Acquisition, Rehabilitation and Resettlement Rules, 2015
Rule 14 (2) [A public hearing with a quorum of at least 25% of the affected families must be conducted to discuss the Social Impact Assessment report]; Rule 21 [The consent of all the affected families to be obtained by the Land Acquisition Officer]
Environmental Impact Assessment Notification, 2006
Clause 7(i)(II) [The Environment Impact Assessment [EIA] Report must address all the relevant environmental concerns]; Clause 7(i)(III)(ii) [A public hearing at the site has to be carried out for ascertaining concerns of local affected persons]; Clause 7(i)(III)(vii) [After completion of the public consultation, the applicant shall address the concerns and make appropriate changes in the draft EIA/EMP]; Appendix II (10) [An EMP has to contain all the mitigation measures for each activity, a monitoring plan for compliance of various environmental regulations and the steps taken in case of emergencies]

Demand for recognition of forest rights under the FRA and return of unutilised land acquired under LARR, 2013.

Police lathicharged thousands of people who had gathered to inspect their plantations. At least 30 were injured, including women and children. In the past, the police have reportedly levelled fake charges against protesters and arrested them, and they are reportedly making door-to-door visits to arrest protesters, forcing many to go into hiding. JSW's musclemen have also allegedly threatened people.

Department of Steel and Mines 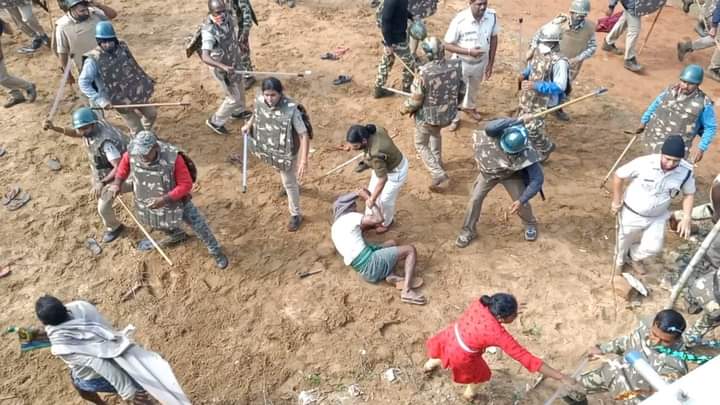 Police resort to lathicharge in Dhinkia 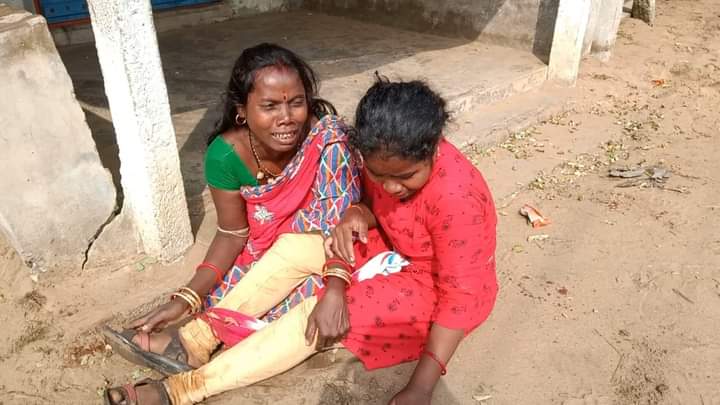 An injured woman and her child