Other Kind of Mining

Barmer has been at the centre of public attention since 2005 when oil, gas and lignite reserves were identified in the region. Land prices here have suddenly soared. As acquisition of land for development projects and mining activities increased, in 2011, Rajasthan State Mines and Minerals Limited (RSMML) acquired a government school at Chiman Singh ki Dhani in Barmar district, running in full swing with about 240 students. RSMML has promised to construct another school in the vicinity for the children of this school at a cost of Rs 87 lakhs. However, non release of funds from the RSMML has resulted in a tussle between the Public Works Department, implementing agency for the construction of promised school, and the RSMML, has stalled work. The School officials and families of the children in the region have led a public campaign and held protest demonstrations demanding for the construction of school in alternative area. In the 201617 Annual report of the RSMML, the public sector unit has stated an expenditure of Rs 87 lakh for the construction of the school in compensation against the acquired school land. Krishna Singh, Block Education Extension Officer, Barmer said that the PWD, after receiving funds from RSMML, had constructed the school and the Government Primary School Chiman Singh ki Dhani has been functional from 2018.

The RSMML had acquired the Primary School building at Chimansingh ki Dhani in Barmer district under the Sonadi Lignite Project. The RSMML had proposed to build the primary schools at an alternative place and provide a financial support of 87 lakhs in 2011-12. In these five years the enrollment of the schools (now running in huts) has declined from 140 to just 40 and there has been no alternative arrangement made till date by the RSMML as proposed by it. This is a major violation of the Right to Education of these children.

Krishna Singh, Block Education Extension Officer, Barmer. He said that the PWD, after receiving funds from RSMML, had constructed the school and the Government Primary School Chiman Singh ki Dhani has been functional from 2018. 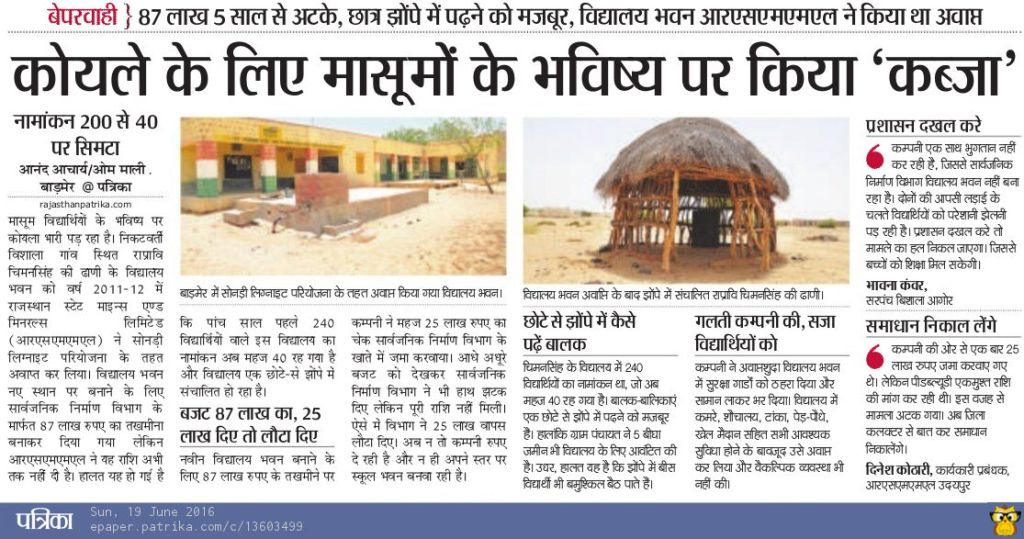