Over a decade later, the families affected by the construction of the proposed Renukaji Dam project continue to await fair compensation and resettlement in the Sirmaur district of Himachal Pradesh.
The multi-purpose project was approved in 1994 and handed over to the Himachal Pradesh Power Corporation Ltd. (HPPCL). The central government plans to construct a 148m-high rockfill dam on the Giri river, a tributary of the Yamuna, at Dadahu village, which would lead to the submergence of 1508 hectares of land. The project aims to supply drinking water to Delhi and parts of Haryana, Rajasthan, and Uttar Pradesh. It would also provide 40 MW power to HP.
The project allocation is 2239 hectares of area, of which 909 ha is forestland inclusive of 49 ha of the Renuka Wildlife Sanctuary. It would affect 748 families in 37 villages. In 2009, the project was declared a national project. Since the cost has shot up to  Rs. 6,946.99 crore.
However, the project came under fire due to rehabilitation and environmental concerns.
In 2009, the project-affected families intensified protests against the land acquisition process under the banner of Renuka Bandh Jan Sangharsh Samiti. However, in October, after the project was granted environmental clearance. The affected submitted a memorandum to the state and central government bodies demanding to scrap the project. They also objected to the state acquiring agricultural lands under the “urgency clause” of the Land Acquisition Act of 1894.
In 2010 – 11, the National Green Tribunal (NGT) put a stay on the project after locals raised objections over the inaccuracies in the granted environmental clearance. According to a report, the locals were also concerned about the impact on “the local ecology and the absence of a social impact assessment study”, and the discrepancies in the compensation rates offered for the land. Consequently, they filed RTIs appeals and PILs. The petitioners also claimed that HPPCL did not account for all the trees which would be submerged in their application for forest clearance.
Regardless, Forest Advisory Committee granted forest clearance to the project in August 2014.
In 2015, one of the affected villages refused to give a No Objection Certificate to the project citing ecological concerns.
In the same year, the Supreme Court directed the central government to expedite the process of giving funds to the state for land acquisition cost, amongst other project-related aspects. According to an article, it also stated that while the project could not be “killed”, the landowners should not suffer.
In February 2016, NGT upheld the environment clearance of the project and dismissed the challenge to the land acquisition. In May, an expert committee by NGT reviewed the rehabilitation and resettlement plan for the dam. Subsequently, it recommended to ensure rehabilitating all the project-affected families at the earliest and to tackle the paucity of funds.
In October that year, the centre released a portion of funds.
In September 2018, villagers displaced by the dam refused to accept land offered to them as compensation, claiming that the new land was barren. They also claimed that they were being compensated as per the 1894 act, while the contractors were offered rates according to LARR 2013.
On November 02, 2018, the High Court ruled to uphold the enhanced market value of the land. Earlier, the state government had challenged the verdict of a lower court.
On January 11, 2019, the governments of Delhi, Rajasthan, Uttar Pradesh, Himachal Pradesh, Haryana, and Uttarakhand signed a Memorandum of Understanding with the Ministry of Water Resources, River Development and Ganga Rejuvenation. However, the project was yet to receive Stage II forest clearance.
In July 2019, the High Court again ruled in favour of a petitioner and directed HPPCL to only pay compensation based on enhanced rates.
In July 2020, the Himachal Pradesh Governor requested the central government to expedite approval from the Cabinet Committee on Economic Affairs. He stated that the affected were not being compensated in time due to a lack of funds.
Since the compensation process is still ongoing.
In April 2021, compensation was granted to 112 landowners in one of the affected villages.
While the governments remain ardent to construct the dam, many of the affected families are still waiting for stalled compensation for the loss of their lands.

Hon'ble High Court of Himachal Pradesh concluded with finding that Reference Court has rightly determined the enhanced market value of land at the rate of 5,00,000/- per bigha, irrespective of nature and classification of land and upheld the impugned award dated 30.5.2014, passed by learned Reference Court and appeals were dismissed. The Supreme Court dismissed the Special Leave Petition. 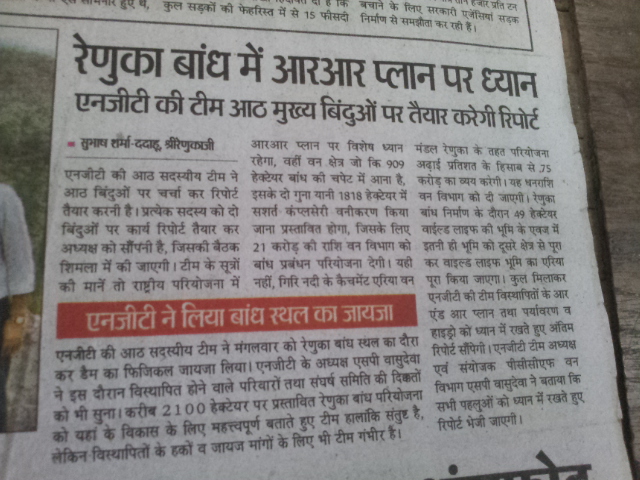 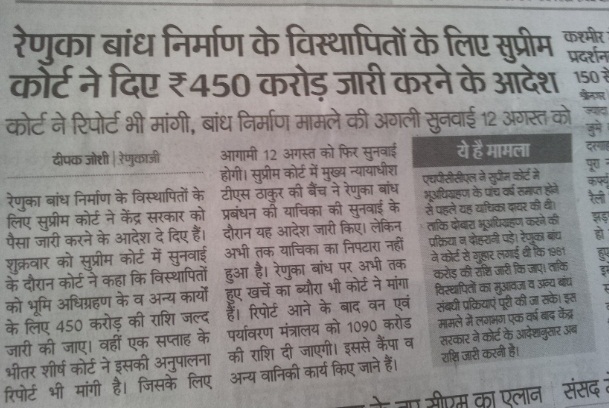