The Hirakud Dam in Odisha is the first major multipurpose river valley project in India. The dam was proposed to be built on the Mahanadi river, 15 km from Sambalpur, in 1946 to provide water for irrigation and power generation and to control flooding. Despite there being mass agitations against the proposed dam in 1945, the late Prime Minister of India, Jawaharlal Nehru officially inaugurated the dam on January 13, 1957. The feasibility report estimated that 168 villages would be submerged covering 1,35,000 acres of land under the Hirakud dam reservoir. However, contrary to the report, postconstruction, the number proved to be significantly higher. It submerged 325 villages covering 1,83,000 acres of land, displacing about 26,501 families (approximately 1,00,000 people). Several displaced families are yet to receive the promised land and compensation. For many among those who received compensation from the government, the amount was deemed to be insufficient as per the market rate. Since 1995, time and again, the displaced people have organised themselves under the aegis of Hirakud Budi Anchal Sangram Samiti, demanding for adequate compensation and rehabilitation. The resistance to Hirakud dam has also been emboldened on the ground due to the consistently underwhelming performance of the dam. The dam had four main objectives – ood management, hydropower production, irrigation and navigation, and in all four criteria, the performance has reportedly not been up to the mark. Over the years, for many displaced and project affected their grievances have compounded. Resistance, at the grassroots level has also carried on. In 2018, The National Human Rights Commission ,acting on a petition filed by lawyer Radhakanta Tripathy, deployed its special rapporteur to investigate the failure of the rehabilitation of around 26,000 displaced individuals. Recently, in March 2021, NHRC directed the Chief Secretaries of both Odisha and Chhattisgarh to submit an Action Taken Report on the mitigation of problems with regards to oustees by April. Further, Gopinath Majhi, noted activist and long time associate of Hirakud Bhudianchal Sangharsh Samiti, informed LCW that the movement on ground continues to be steady, albeit slow at present due to the pandemic and the consequent lockdown. He further communicated that, in a recent development, land pattas for homestead land for 10,000 families which had been pending since 2002, were finally granted in 2021, after talks held with the government in 2020.

Delay in allottment and possession of land/property 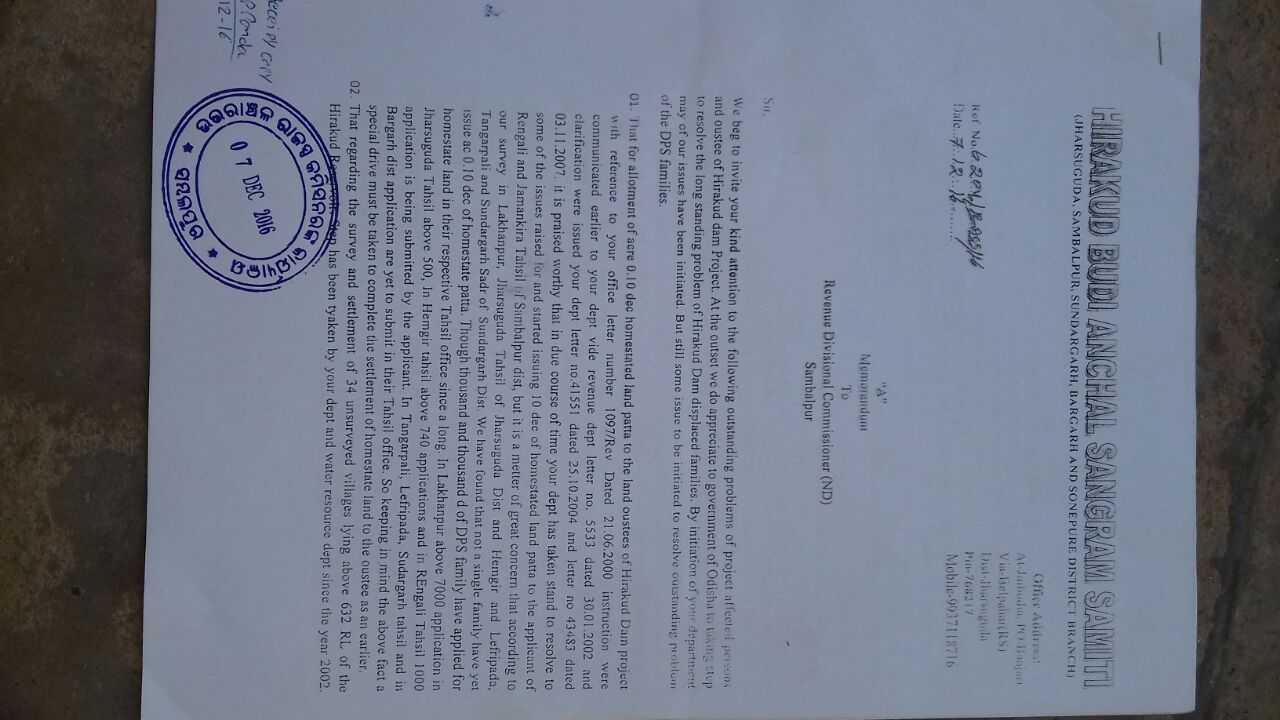