The Gouravelli reservoir, which was proposed under the Jalayagnam project in 2007, is being built in Husnabad mandal in Karimnagar district. Initially proposed at a capacity of 1.4 tmcft (thousand million cubic feet) by late Chief Minister Y. S. Rajasekhar Reddy, the capacity of the reservoir has been increased to 8.23 tmcft by the Telangana Rashtra Samithi, the current ruling party. Now, the government requires an additional 1,967.18 acres of land, of which 960 acres are private land, in addition to that already acquired for the old plan. While land acquisition is yet to be complete, the compensation process has not been up to speed with it. In fact, the compensation process for the land acquired for the old plan is still far from complete. The main contention of the affected community is twofold. First, the government has substantially delayed the compensation process and has left the affected farmers high and dry. Second, the compensation prices being offered are much below the market price. On this account, they demand that either the compensation package should be increased to INR 1517 lakh per acre or the affected households should be given houses within a two kilometre radius of Husnabad with the remaining amount paid as per prevailing market rates. The farmers have repeatedly voiced their grievance against the lack of compensation. In August 2015, unhappy with the rehabilitation and resettlement package, they tried to approach the chief minister on his visit to Gudatipalli village but could not meet him. In December 2017, villagers were 536 days into observing a relay fast demanding implementation and adherence to the Land Acquisition Act, 2013, afraid of losing land for a second time. In the same month, a _gram sabha _(Village Assembly) was held, but it was concluded abruptly without sufficiently involving the villagers. The construction work was launched in January 2018 by Irrigation Minister Harish Rao and was followed by the Telangana high court ordering the state government in June 2018 to not displace families before providing them with resettlement and rehabilitation packages. But the order was not followed. In February 2020, the farmers protested again, blocking JCBs and lorries working on site and demanding to be compensated at least before the project was completed. In August 2020, farmers received notices from the government stating that they have to accept INR 8 lakh as compensation, which is less than half the market price. This forced them to file a writ petition before the high court demanding justice.

High Court for the State of Telengana 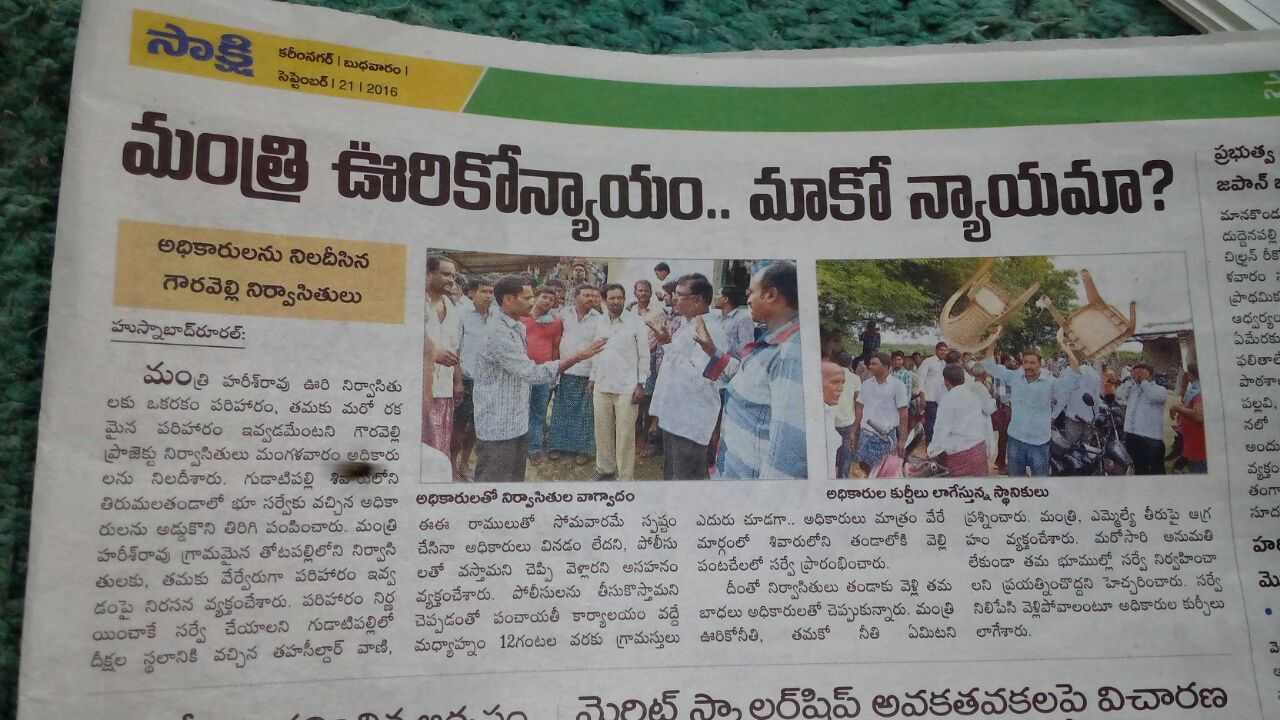