The districtlevel committee (DLC) constituted under the Forest Rights Act (FRA), 2006, has rejected the forest rights claims of 26 residents of Neempada village and of 25 residents of Nirgundmal village in Dang district in Gujarat, citing insufficient evidence in both the cases. The Bhil, Konkana (Kunvi) and Varli are the three main tribal communities living in Dang. On August 9, 2018, people from 311 villages gathered and rallied up to the district headquarters in Ahwa, protesting against the rejection of their claims and violation of the FRA. The DLC is currently hearing all individual forest rights claims pending since 2016. It has been rejecting all claims on the ground of 'insufficient evidence' and has been issuing eviction notices to all the claimants, which violates the provisions of the FRA. Section 4(5) of the Act categorically states that no member of a forestdwelling Scheduled Tribe or another traditional forest dweller shall be evicted or removed from forestland under his occupation until the recognition and verification procedure is complete. The 26 residents of Neempada had filed claims to forestland under the FRA in 2008. After eight years of delay, in 2016, the subdivisional committee (at the block level) rejected all their claims, followed by the DLC. The village residents claim that officials from the state forest department erected fences around the forestland belonging to 10 claimants from Neempada and dug up the land to carry out plantation drives while the claims were still pending. The affected residents submitted an application to the district collector on March 30, 2018, requesting appropriate action but to no avail. Digging of lands continued. On February 13, 2019, the Supreme Court ordered that all households whose rights claims under the FRA have been rejected should be evicted from forests by July 2019. After widespread criticism and protests it temporarily stayed its own order on February 28, 2019. Twentyone states, including Gujarat, were ordered to explain to the Supreme Court how the FRA claims were accepted or rejected. While the eviction was put on hold, the state governments conceded that the FRA implementation is deeply flawed and pleaded for more time to review the claims, which run into lakhs.

Non-implementation/violation of the FRA, Forced evictions/ Dispossession of Land 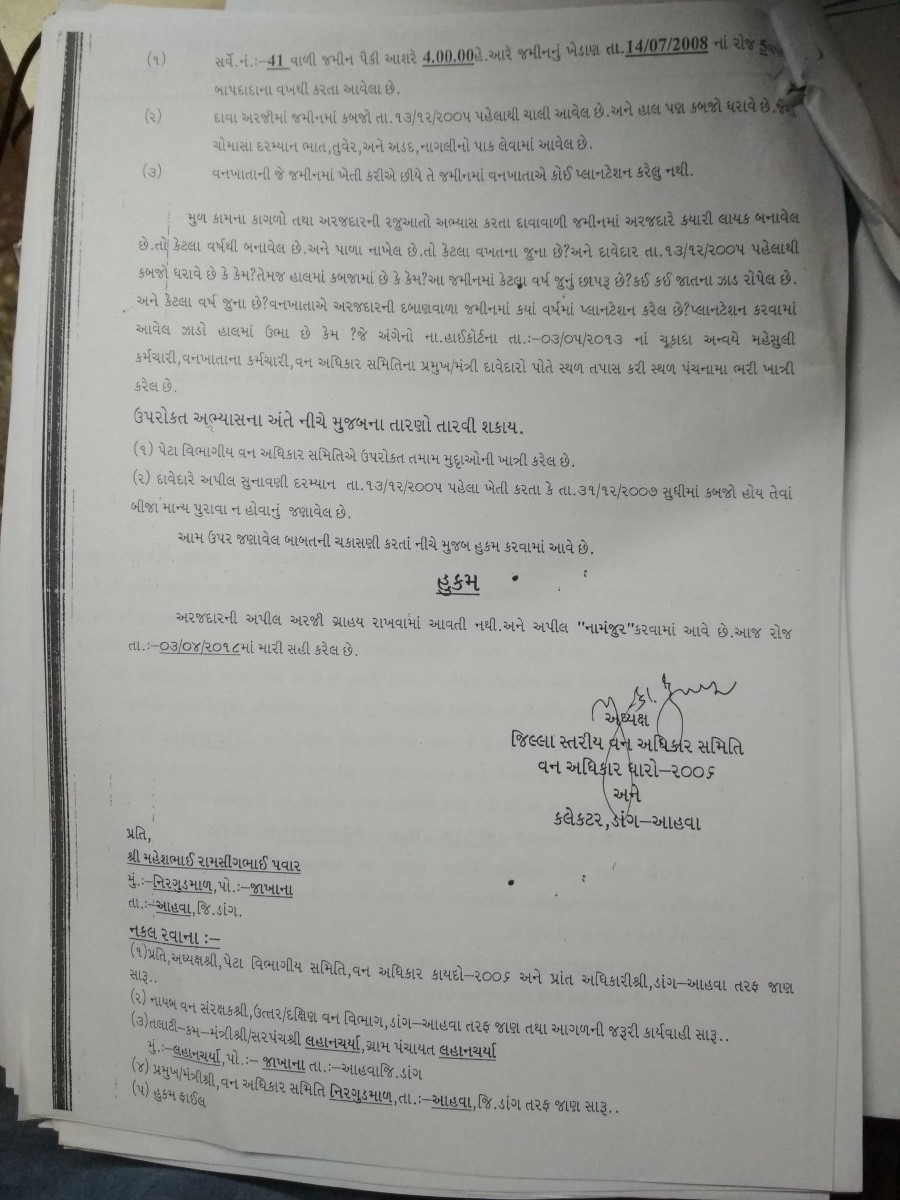