The Sevoke-Rangpo broad gauge railway project, the only other connecting link between Sikkim and the rest of India in addition to NH-10, is facing opposition by forest dwellers affected by the project. They have alleged that the project violates the Forest Rights Act (FRA), 2006. The railway project holds significance for India because of the geographical location of Sikkim, which is surrounded by Nepal, Bhutan and China, even as the latter is trying to develop its hegemony in the region by building infrastructure and communication. Local organisations, such as the Himalayan Forest Villagers Organisation (HFVO), North Eastern Society for Preservation of Nature and Wildlife and Uttar Banga Ban Jan Shramajibi Manch, have protested against the implementation mechanism of the project. The railway line, which is proposed to be laid between Sevoke (in Darjeeling district in West Bengal) and Rangpo (in Sikkim), covers 52.7km, of which 51.7 km falls under the Gorkha Territorial Administration (GTA) in Darjeeling and Kalimpong districts in West Bengal. According to Lila Kumar Gurung, general secretary of the HFVO, more than 40,000 people in 24 villages will be affected by the project, although the Railways has only identified 26 families. Under the FRA, a project developer requires a no-objection certificate (NOC) from the village assembly (gram sabha) of the area in the presence of at least half of its representatives for acquiring land for developmental purpose. "In 2011, village assemblies were formed by the residents of 24 villages, but the GTA did not recognise them," said Swarup Saha, a leader of Uttar Banga Ban Jan Shramajibi Manch. The forest villages in an area where the FRA is implemented need to be converted into "revenue villages". Invoking the law, the residents of one of the villages demanded the same. But since village assemblies are not recognised in Darjeeling, their demands have remained unfulfilled. Meanwhile, the GTA itself has been issuing NOC for the project, flouting the FRA norm, which stipulates that a village assembly has the right to consider the diversion of forestland under its jurisdiction for developmental purpose through a specially convened meeting and after carefully considering all factors. The foundation stone for the project was laid in 2009 by then Railway Minister Mamata Banerjee. The deadline was 2015, but it never saw the light of the day due to massive protests by forest dwellers. In 2015, the National Board For Wildlife (NBFW) gave the green signal to the project on the assurance of the railway board that speed restrictions will be enforced, and animal-tracking sensors will be set up to prevent any harm to the wildlife in the area. It also ordered that tunnels should be dug only during the day. The Supreme Court cleared the project in 2016, subject to the strict guidelines of the NBFW. In 2011, approximately 200 families had applied for forest rights under the FRA. In July 2020, the district officials responded by questioning their rights on the land and rejected their claims. Gurung said, We had been submitting the claim forms since 2008, then we had to submit them again in 2011. We have done this several times. They are only holding us back with such claim forms. We want our villages to be converted into revenue villages." According to local MP Raju Bista, the rejection of claims is an easier route to evict the forest dwellers to facilitate the railway project. 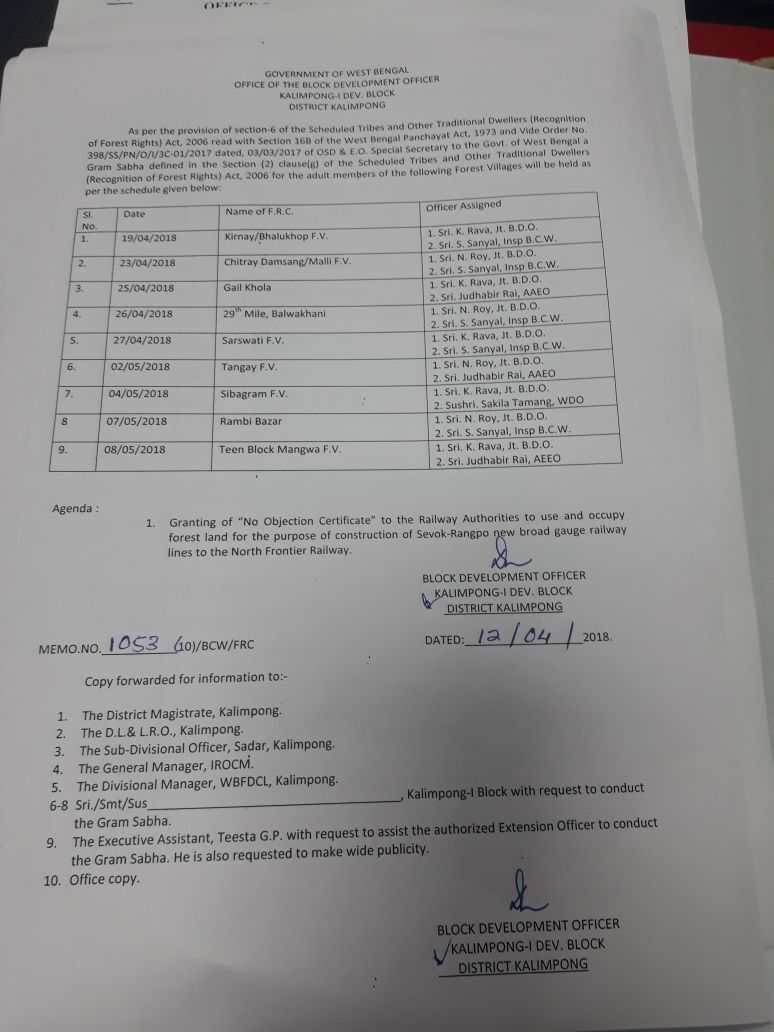