Umngot or Dawki river in Meghalaya is distinctly the cleanest river in India, which runs through a deep valley between the eastern part of the East Khasi Hills and the western part of the Jaintia Hills. The 210megawatt Umngot Hydroelectric Project is proposed to be built right over the river. The dam site is planned at Saida near Siangkhnai village, with a Surface Power House (3X70 megawatt) on the right bank of the river near Syntung village. A total of 390 hectares of land will be required. Meghalaya Power Generation Corporation Limited has taken up the project and is determined to complete it in six years from the date of clearance as noted in the draft Environmental Impact Assessment released in January 2021.  On August 7, 2020, the Meghalaya Democratic Alliance (MDA) government terminated the agreement signed in 2007 with Jaiprakash Power Ventures Limited for executing the previously drafted 240megawatt Umngot Hydroelectric Project. The agreement got cancelled because of a long delay in implementation and financial inconsistencies between Jaiprakash Power Ventures Limited and Meghalaya Energy Corporation Limited (MeECL), the implementing agency. The new draft considers the absence of national park, wildlife sanctuary, defence establishments, notified ecosensitive or protected areas under the Wild Life (Protection) Act within the proposed project area. However, though undesignated, the proposed site is a marine habitat, and the power project will result in biodiversity loss, in addition to submerging agricultural fields. Another red flag is that the area falls in a highly seismic zone, categorised as Zone V. The farmers in the area depend on the Umngot river for agriculture and livelihood and see the project as a threat. They believe it is impossible to fill the void for the loss of land and forest cover and have, therefore, strongly opposed the project. On April 9, 2021, the Meghalaya State Pollution Control Board called off a public hearing facing stiff resistance from the residents of Darrang, Shnongpdeng, Dawki and adjoining villages. A day earlier, another hearing was stalled in the face of public opposition in Siangkhnai village. People lined up the road towards the venue of the public hearing with banners and slogans, and officials had to return due to the blockade. In a public hearing on April 12, farmers, village heads, residents and student bodies neither welcomed nor rejected the proposed project. There were contradictions as the presentation given by officials did not cover all aspects of the project. There were allegations that the village heads were informed before the survey but not everyone had consented to the project, and that in many villages, the economic survey was not even carried out. Back in 2007, MeECL had applied for prior environmental clearance for the 240megawatt Umngot Hydroelectric Project from the Ministry of Environment, Forests and Climate Change. The ministry did not grant clearance. Later, the MDA government cancelled two hydroelectric projects within three months. But now, with growing outrage over power shortage across the state, the ruling government has decided to revive the project.

To not issue any NOC for the proposed project

Scheduled Tribes and Other Traditional Forest Dwellers (Recognition of Forest Rights) Act, 2006
Section 3 (1) [This section enlists the rights of forest-dwelling Scheduled Tribes and other traditional forest dwellers, which include right to hold and live on forestland, right to protect any community forest resource traditionally used, and the right to rehabilitation in case of displacement]; Section 3(2) [Union government shall provide for diversion of forestland for non-conventional source of energy provided that the land diverted is less than one hectare and is subject to the recommendation of the Gram Sabha]; Section 5 [This section stipulates the powers and duties of holders of forest rights to protect the wildlife, forests and biodiversity, catchment area, water sources, other ecologically sensitive areas in their region and preserve their habitat from destructive practices that affect their culture and heritage]
Forest (Conservation) Act, 1980
Section 2(ii) [Authorities or state government can pass orders for use of forestland for non-forest purposes only with the prior approval of the Union government]; Section 2(b) ['Non- forest purpose' does not include construction of dams for the purposes of Section 2 of this Act]
Wild Life (Protection) Act, 1972
Section 5C [Duty of the National Board to promote the conservation and development of wildlife and forests]; Section 25(2) [Any acquisition under this Act will be deemed to be for public purpose]; Section 24(2)(b) [The collector may proceed to acquire land provided the land owner has agreed to surrender it on payment of compensation]
Electricity Act, 2003
Section 3 [This provision vests powers on the Union government to take all measures necessary for the purpose of protecting and improving the quality of the environment]
Right to Fair Compensation and Transparency in Land Acquisition, Rehabilitation and Resettlement Act, 2013
Section 2 (1)(b)(iv) [Applicability of the Act to projects related to water harvesting and water conservation structures]; Section 4 [Social Impact Assessment to be conducted by the appropriate government in consultation with the Gram Sabha, panchayat, municipality or municipal corporation as the case may be]; Section 8(1) [The appropriate government should ensure that the public purpose for which the land is to be acquired is bona fide and legitimate and that the potential benefits outweigh the social costs and adverse impact as determined by the Social Impact Assessment]; Section 8(2) [The appropriate government should ensure minimum displacement of people, minimum disturbance to the infrastructure and ecology and minimum adverse impact on the individuals affected]
National Policy on Disaster Management, 2009
This policy classifies Meghalaya as a high-damage risk zone (Zone V)
Paragraph 7 [Under this provision, public hearing is the third stage before grant of environmental clearance for a new project]

LCW reached out to B.K. Lyngwa, principal chief conservator of forests, via telephone but did not get a response. 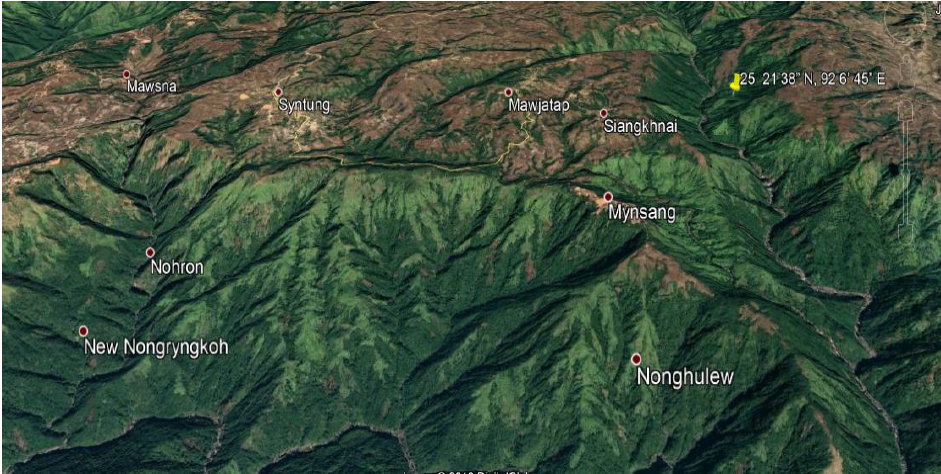