Barjora (North) Coal Mine in Bankura district is spread over 700 acres across the villages of Manohar, Baguli, Ghutghoria, Sitarampur, Saharjora, Tikargram and Baraphukhuria. Owned by Damodar Valley Corporation and Eastern Mineral and Trading Agency till 2006, the mine was ordered to be shut down by the Supreme Court in 2014, along with 203 other coal blocks in the country. In 2015, West Bengal Power Development Corporation Limited (WBPDCL) bought ownership rights for the mine in an open bid auction. Montecarlo Barjora Mining Private Limited later procured rights to extract coal from the mine. The estimated cost of mining was INR 918.58 crore, and 228 hectares of land were leased for the same. Residents of Keshabpur and Manohar villages have complained of cracks in their houses due to blasts from mining operations. "More than 150 houses in our village have cracks, and all of them start shaking violently during the explosions. The tiles start falling down from the roofs so we have to wait outside the house during the blasts. Even our crops have been destroyed by the collierys polluted water. Our lives and environment are under threat. When we protested against WBPDCL & Montecarlo, they filed cases against 13 of us six men and seven women. Some of the women are older than 60, Baren Bauri, a resident of Manohar village, informed LCW. Suman Bhaduri, a resident of Keshabpur village, added, Our village adjoins the colliery, but it does not fall within the blast radius. We have filed complaints with the Block Development Officer (BDO), panchayat and higher authorities but all in vain. Cases have been slapped on five persons, including me. None of the companys promises, including 500 days wages to the affected people, road repair work and other infrastructure development, have been fulfilled. The agrarian labourers in our village are without livelihood.  BDO Bhaskar Roy refused to speak to LCW when questioned about the villagers allegations. However, WBPDCLs Land Officer Pradeep Roy told LCW that they have received reports of cracks appearing on houses and that subsequent investigation is underway. He said that the company generally blasts 50 metres away from settlements and since these villages are outside the blast radius, there is no question of rehabilitation. He, however, mentioned that when the mine is fully operational, the agrarian labourers in the area will be employed and some of the companys CSR funds would be allocated for the development of the village. According to the All India Agriculture Workers Union, only 262 people of the 600 affected by mining have received 500 days wages as promised. These 600 people also include agricultural labourers from nearby villages, some of whom do not own land or houses in Keshabpur and Manohar villages.    In protest, the Union members organised rallies and gheraoed the district magistrate's office on August 1, 2019. They went on an indefinite hunger strike in January 2020 demanding rehabilitation, employment and compensation for the agrarian workers. The Union called off the strike after 10 days when the BDO and local police promised to look into the matter.  Meanwhile, many of the local people who collect coal from abandoned areas of the mine to sell in their local markets get injured in the process. In January 2020, three people, including two women, died in Baguli village while collecting coal as the mine caved in when they were inside.

Water (Prevention and Control of Pollution) Act, 1974
Section 24 [Knowingly disposing toxic substances in a stream of water is an offence under this Act]; Section 43 [Whoever contravenes Section 24 to be punishable with at least 18 months of imprisonment and fine.]

False cases were filed against residents who protested against WBPDCL and Montecarlo.

WBPDCL's Land Officer Pradeep Roy told LCW that they have received reports of cracks appearing on houses and that subsequent investigation is underway. He said the company generally blasts 50 metres away from settlements and since these villages are outside their blast radius map, there is no question of rehabilitation. He also mentioned that when the mine is fully operational, the agrarian labourers would be employed and some of the profits will be allotted for the village's development as part of the corporation's CSR initiative. 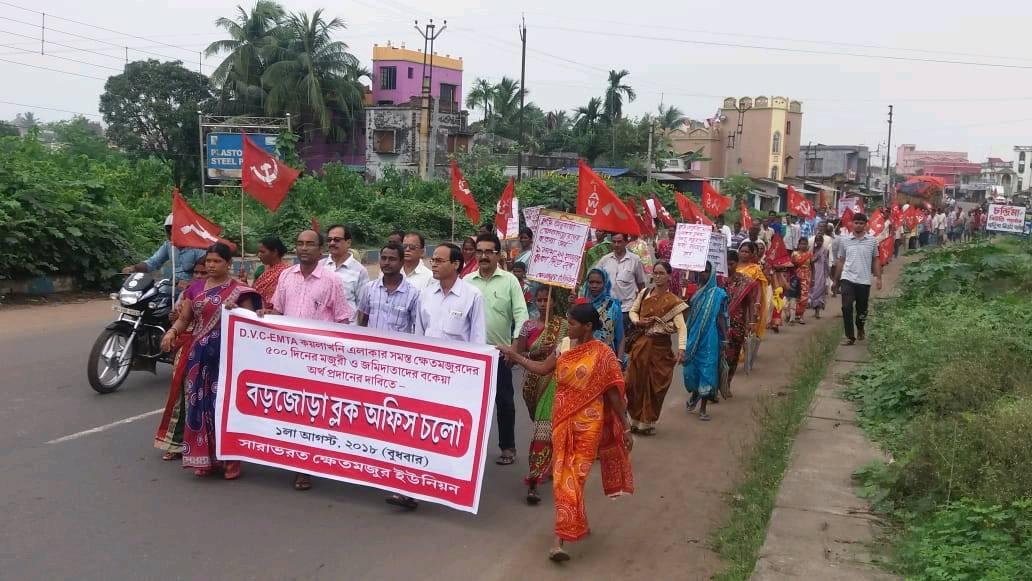