A new diamond mining project in the forests of Buxwaha have come under the radar of activists and environmentalists. The state government, in December 2019, awarded a mining lease for the Bunder Diamond Block to Essel Mining & Industries Limited, an Aditya Birla Group company. The Bunder block is spread over 364 hectares of forest area in Sogoriya village in Buxwaha tehsil. The block is estimated to have 34 million carats of rough diamonds (diamonds occuring naturally inside the earth). The district administration has diverted 382 hectares of forestland for the project.

Two petitions filed in the National Green Tribunal (NGT) by P.G. Najpande and Ujjwal Sharma claimed that the project will cause deforestation by cutting four lakh trees and will exacerbate the water crisis in the Bundelkhand region. The petition also noted that the government cleared the project in violation of several environmental laws. Accepting the arguments put forward by the petitioner, the NGT bench imposed an interim stay on the project in July 2021. The bench also noted several legal anomalies, including violation of the Forest Conservation Act of 1980, failure to get permission for groundwater extraction, lack of a comprehensive environmental impact assessment and the absence of a working plan for the conservation of wildlife.

Talking to LCW, Rambabu Tiwari, a local student activist working on water issues in Bundelkhand and part of the Save Buxwaha campaign, said, “The company has succeeded in brainwashing the village people. They are supporting the project because the company has promised them employment, flats, roads and airports at the costs of unsustainable development and indiscriminate exploitation of natural resources like forests and water.” Expressing concern about the fate of forests in Buxwaha, Tiwari added that the campaign was losing momentum as the company was more powerful and had more resources at its disposal. “They have the support of the government, but this project is harmful for the region,” he said.

Save Buxwaha is an online/community mobilisation campaign aimed at spreading awareness about the problem of bauxite mining in the region and garnering support for the cause.

Buxwaha had witnessed similar protests earlier in 2016 when a mining lease was granted to Australian mining giant Rio Tinto. The company made an unexpected exit in 2017, handing over the project to the state. Stiff resistance and environmental concerns are speculated as reasons behind the company’s exit.

Applications were filed in the National Green Tribunal (Central Zone) to challenge the grant of mining lease over 364 hectares of forestland to Essel Mining Industries Limited. A number of anomalies were detected by the NGT in its order on June 30, 2021. These included Expert Committee and Advisory Committee not being constituted under the Forest (Conservation) Act, 1980, and a comprehensive impact assessment not being carried out. The NGT passed a lengthy order reiterating the provisions of the National Forest Policy, 1988, the Forest Conservation Act and the Indian Forest Act, 1927. The tribunal directed the respondents and the Principal Chief Conservator of Forest, Madhya Pradesh, to strictly follow the guidelines contained in Section 2 of the Forest Conservation Act as well as the guidelines issued in T.N. Godavarman Thirumulpad Vs. Union of India (1997) 2 SCC 267. The matter is slated to be listed next on March 21, 2022.

LCW reached out to Krishan Sinha, general manager, Essel Mining & Industries Limited, via phone and email but did not get any response.

LCW reached out to Krishan Sinha, general manager, Essel Mining & Industries Limited, via phone and email but did not get any response. 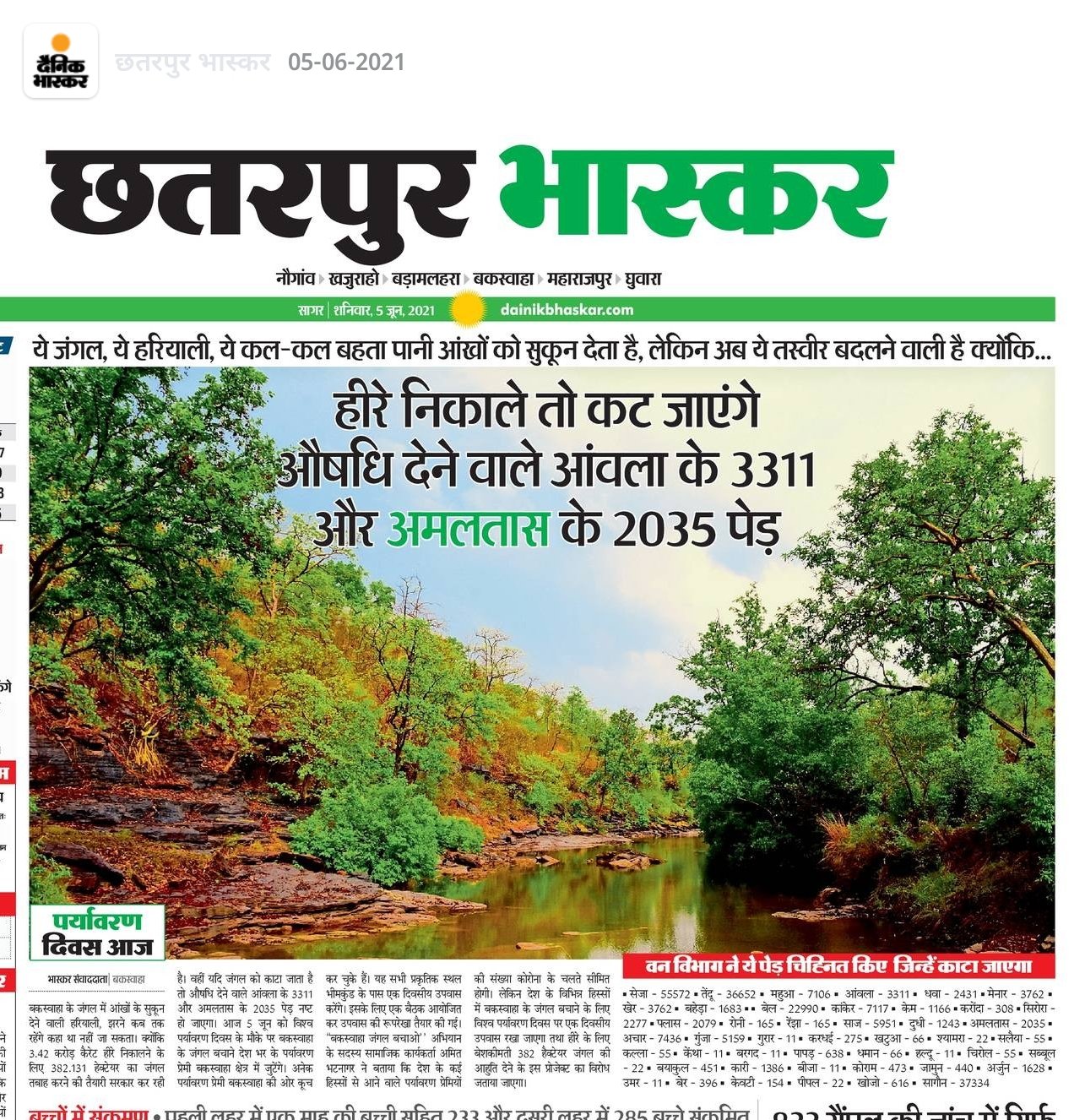 New clipping highlighting the cutting down of 3,311 trees