Maharashtra Tourism and Environment Minister Aditya Thackeray’s ambitious project to build a 39-kilometre cycle track around the Powai and Vihar Lakes has been met with stiff public resistance. The track runs from Mulund to Wadala along the Tansa water pipeline and is meant to ensure that the 16,000-plus ‘encroachments’ that were removed in 2017 do not come up again.

Several trees have already been cut near the two lakes, and massive debris, earth and stones have been dumped in the area. The construction of a concrete road has started and concrete walls and water drains are being laid. Scientists and environmental experts consider the area surrounding Vihar and Powai Lakes an eco-sensitive zone, although it is not officially notified as such**. **They say that a cycle track along the land-water interface will impact the habitat of many species living in the lake, including the nesting place of crocodiles.

"The cycle track in and around Powai and Vihar Lakes and the forested areas is detrimental to Mumbai's fragile ecosystem. Be it the crocodiles, soft-shell turtles or the local adivasis, all who depend on the lakes and the forest will be immensely affected. Instead of making a cycle track on the existing roads, the BMC is reclaiming parts of the lake and forest that goes against its own glorified Mumbai Climate Action Plan," an activist told LCW on the condition of anonymity.

The Brihanmumbai Municipal Corporation (BMC) plans to build a gabion wall around the lakes to prevent sewage and construction debris from flowing into the lakes. According to an urban planning researcher, there is no evidence that such a mechanism will not impact run-off and is, in fact, more likely to block upstream water and cause flooding. Construction activities will also increase solid waste and noise pollution.

In November 2021, the Bombay high court issued a stay order on the cycle track in response to a public interest litigation (PIL) filed by two IIT-Bombay students. The BMC refuted the claims made in the PIL and stated that since the Powai Lake is a man-made reservoir, the cycle track did not flout any wetland norms. The petitioners, however, said that "construction activities carried out in the ecologically fragile wetland of Powai Lake are a serious threat to protected and multiple endangered species of flora and fauna and that there is no public information available on ongoing construction activities at all, hence the application". Even RTIs have reportedly not been answered.

Citizens have been physically and digitally protesting against the cycle track for over two months. They have launched public and social media campaigns, left notes on trees and are trying to create awareness through music.

In November**, more than 650 **people wrote letters to Maharashtra Chief Minister Uddhav Thackeray and state Tourism and Environment Minister Aditya Thackeray requesting them to stop the construction. However, the letters were returned unopened and were stamped with “No Entry” and “Not Accepted”, local activist Nishant Bangera told LCW.

Wetlands (Conservation and Management) Rules, 2017
Rule 4 [Restriction of activities on wetlands to include any construction of permanent nature]
Part VII, Point 3.6 (VII) [Green belt of 100 metres to be constructed around Powai lake to prevent erosion and silting of soil]
Constitution of India, 1950

On November 1, 2021, the Bombay High Court passed an interim order, directing a stay on the construction activity of the proposed cycling and jogging tracks. The court noted the submissions of the petitioners stating that Powai Lake was notified as a wetland as per the National Wetland Atlas. The court also reiterated the DC Regulations for Greater Mumbai, 2034, which state that a green belt of 100 metres was to be provided around the periphery of Vihar and Powai Lakes to prevent erosion of soil and silting. The court further reiterated Article 51A(g) of the Constitution, which provides for the protection of the natural environment. The next date of hearing is slated for March 11, 2022, with the interim order to continue until end of March.

LCW called up the office of the Brihanmumbai Municipal Corporation, but the call was transferred back and forth between many departments. 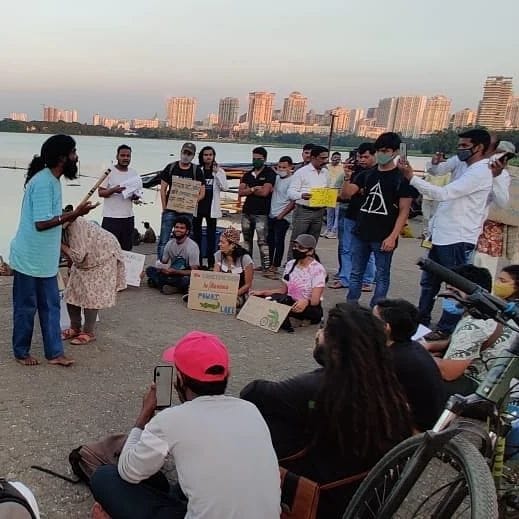 Citizens protest against the cycle track near Powai Lake