Development of Crown Road in its current alignment

Auroville is a cultural township spread over 20 Square Kilometre across Tamil Nadu and northern Puduchhery. Its residents include citizens from around the world. It enjoys a special autonomous status and is governed by the Auroville Foundation Act, 1988. It's day-to-day management is run by the Auroville Foundation, which in turn functions under the administrative control of the Ministry of Human Resource Development, Government of India.

The conflict in Auroville Township started on December 2, 2021, when the Auroville Town Development Council (ATDC) sent an email to the Youth Centre informing them that the work on clearing the 16.7m ‘right of way’ would begin in a week. However, the ATDC started felling trees to make way for the Crown road project on December 4. Several Auroville residents gathered on the spot to protest the tree felling.

The Crown road project is a part of Auroville's Universal Township Master Plan – Perspective 2025. The layout of this plan includes a circular inner ring know as the 'Crown', 12 radial roads and an outer ring. Stretching over a length of 4.3 Kilometre, the crown road has a right of way of 16.07 metres wide. This road has been planned as a key part of the township that will provide service facilities to its different zones. As per the current plan, the Crown road will pass through forest and river catchment areas, and involve felling of trees in Darkali and Bliss forests in Auroville.

The Master Plan was first prepared in 1999 by residents of Auroville and approved by the Resident's Assembly under the Auroville Foundation Act, 1988. The Governing Body of Auroville felt the need to consult planners for that plan at the state and national level. This resulted in the formulation of the Universal Township plan in 2001. This was approved by the then Ministry of Human Resource Development and Auroville's Governing Body. It was however not submitted again to the Resident's Assembly for its approval. The plan was finally gazetted in 2010 by the Auroville Foundation.

The implementation of this plan adopted a greater pace in 2021, marked by felling of trees by the Auroville Foundation. This occurred despite several concerns raised by Auroville residents, and a decision made by Auroville's Resident's Assembly to stop all development on the Crown road. The pressure to complete the project comes at the heels of the recent appointment of a new secretary to the Auroville Foundation by the Union government. During this period, Auroville residents who have been protesting the implementation of Crown road, proposed an alternative alignment for the road that would bypass two water catchment areas and the forest. But the Foundation did not take accept the proposal.

On December 10, 2021, the NGT issued a stay order against further felling of trees. However, residents alleged that digging of trenches went on December 18, 2021. In its order issued on April 28, 2022, besides permitting the Auroville Foundation to continue with the project, NGT also established a joint committee. This committee is expected to submit a report in two months on ways by which the number of trees felled may be minimised.

Sandeep Vinod Sarah, one of the two petitioners who approached the NGT, told LCW that at least 50 houses and many other buildings in Auroville are identified in the Crown road project and face the threat of demolition. "No authority other than the Residents' Assembly, or a body given authority by it, has the power to ask residents to shift from a place. But, there is a blatant misuse of power by the [Auroville] Town Development Council and the Secretary of the Foundation," he said. "We are currently awaiting the report from the joint committee appointed by the NGT. However, in the meanwhile, the Foundation has been taking up levelling work and laying high-tension cables in parts that were already cleared, before the status quo order arrived, in violation of the Residents' Assembly's directions."

Non-Forest (Other than Grazing Land), Forest and Non-Forest

On April 28, 2022, the Southern Bench of the NGT passed a judgment in the case. It directed the Auroville Foundation to prepare a proper township plan and then apply for Environmental Clearance as the project falls under Item 8(b) of the EIA Notification, 2006. Without the same, the Foundation was directed to not proceed with further construction. However, the Tribunal allowed the Foundation to complete the Crown Road subject to a number of conditions. A Joint Committee consisting to district collector, a forest officer and the chief wildlife warden of the state had to inspect the area to minimize the number of trees to be cut as well as check whether any water bodies exist in the area. The Tribunal also directed the foundation to plant trees in a ratio of 1:10 for the number of trees to be cut. In the judgment, the Tribunal concluded that the forestry in the area does not fall under the definition of forest under the Forest (Conservation) Act, 1980. Hence, they would not have to obtain clearance under the same.

Auroville residents were allegedly manhandled and detained by the Police late at night. The police officials were escorting the officials of ATDC, who had reached the Bliss forest with bulldozers to uproot trees to clear the way for the Crown Road project. 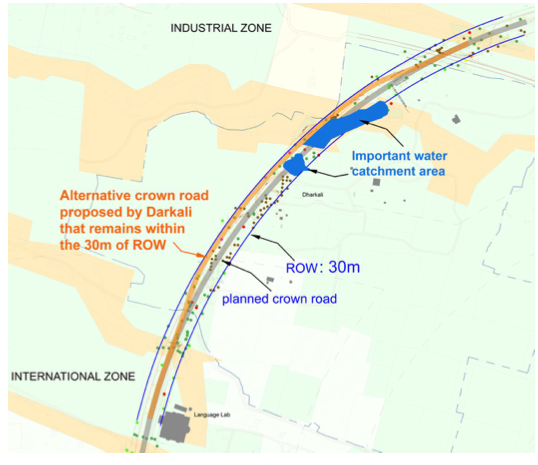 A map of the proposed and alternative routes of the Crown road. 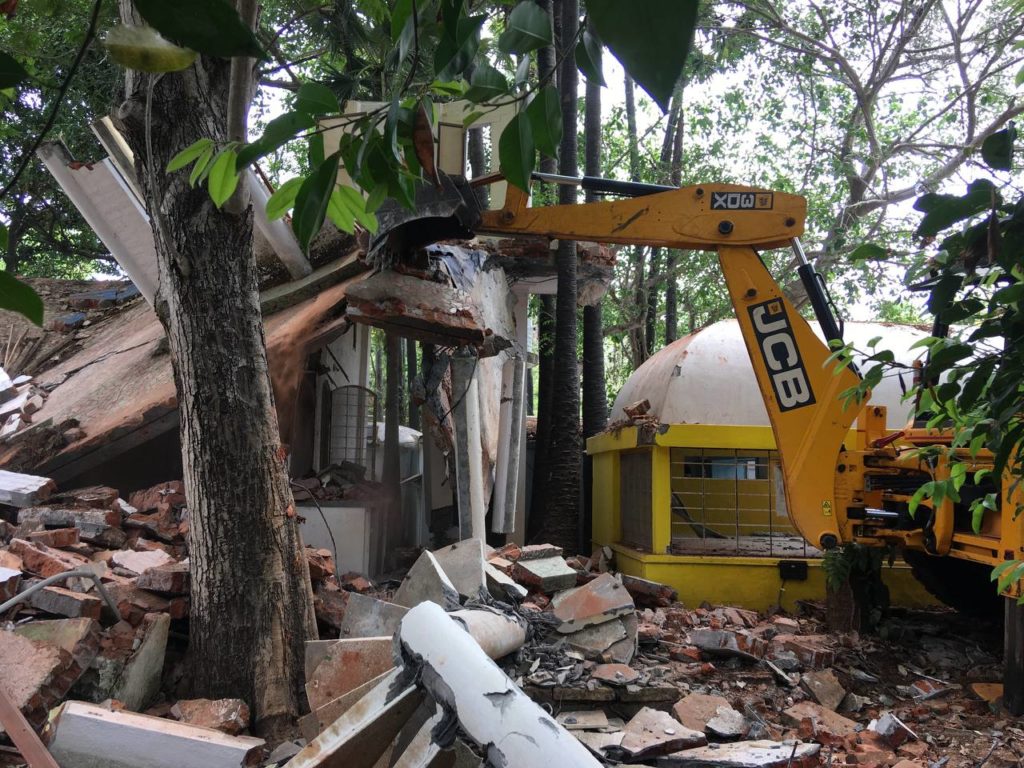 A picture of a bulldozer razing two "unauthorized" houses in Auroville.