On 30th January, 2022, the Karbi Anglong Autonomous Council (KAAC) aided by the Police and district administration carried out an eviction drive to remove around 100 households in Balijan ‘C’, Lahorijan along Assam-Nagaland border. The KAAC's Land and Revenue Department alleged that people are not allowed to own personal properties in the area and that it had been encroached illegitimately without legal papers and rightful consent. It was alleged that 80 percent of the people affected by the eviction were Nagas who possessed land in Khan Basti which falls within Balijan ‘C’. The residents claimed to have bought their lands from the descendants of Late Hazi Manigul Khan and had been residents of the area for several years. This is the third eviction drive that Lahorijan has witnessed in the recent past, with the other two occurring in December 2021.

The state officials alleged that the residents hurled stones at the authorities during the eviction, which was retaliated with lathi charge, shots in the air and tear gas from the police in order to disperse the protestors. Karbi Anglong, Superintendent of Police, Pushpraj Singh, stated “We had to fire rubber bullets… no civilians were hurt but one policeman was severely injured.”  A cameraman from PragTV reportedly got hurt in the protest too.

The village chairman of Balijan C, K Aye told LCW that they are not against Karbi Anglong but are compelled to go to the court due to the eviction notice served to them. He claimed that the village has been existing for 112 years (as of 2022) and that they are not 'encroachers' but have purchased the land with their hard earned money. He also added that there are some Nagas who have been living in the area for 40 to 50 years. They have Voter Ids, Ration Cards, pay electricity bills, and some even possess National Register of Citizen's certificate, and have been living peacefully in the KAAC administered area. He told LCW that the next court hearing will be on 26th of April, 2022, adding that they will not abandon their houses even if the court verdict is not in their favour. He shared they are currently trying to resolve the issue amicably with the KAAC officials, and have met with them in person to find a solution.

Meanwhile, Naga Student's Federation President, Kegwayhun Tep and General Secretary, Süpüni Ng Philo, have written a letter to the Chief Executive Member (CEM) Karbi Anglong Autonomous District Council (KAADC), Tuliram Ronghang. While the Chief Minister of Nagaland has sent a written request to Assam’s Chief Minister asking for his involvement on the matter to secure the lives and assets of the Nagas living in Karbi Anglong.

Settlement Rules under the Assam Land and Revenue Regulation, 1886
Rule 18(2) [Deputy Commissioner may confiscate, sell or destroy any unauthorized crop or buildings erected on land and eject such persons from the land], Rule 18(3) [Deputy Commissioner must publish a notice to persons they are seeking to eject for vacating the land within 15 days of the publication of notice]
Constitution of India, 1950
Article 14 [Right to equality, protection from arbitrary state action], Article 21 [Right to life with dignity, not to be deprived except by procedure established by law]

The affected people claimed that the officials went ahead with the eviction drive even though the matter was due for hearing in a few days from then, i.e. on February 2, 2022.

Writ Petition (C) 7211/2021 was filed by 35 individuals who were aggrieved by the eviction notice served by the Joint Secretary, Department of Revenue, KAAC on 26.11.2021. The government claimed the individuals had been occupying government land and directed them to vacate the land within 15 days of the notice. The petitioners contended that they are patta holders of the land. On December 23, 2021, the Gauhati High Court passed an interim order, asking the petitioners to individually submit the Dag number and Patta Number of land in their possession. The Court stated that the revenue authorities would not proceed with evictions without following the due process of law. On January 31, 2022, the Court directed that if any eviction drive had been carried out regardless by the respondents, the petitioners had the liberty of filing a contempt petition. A contempt case has been filed by 7 of the Petitioners thus far and will be heard along with the main writ petition. The next date of hearing is slated to be May 26, 2022. 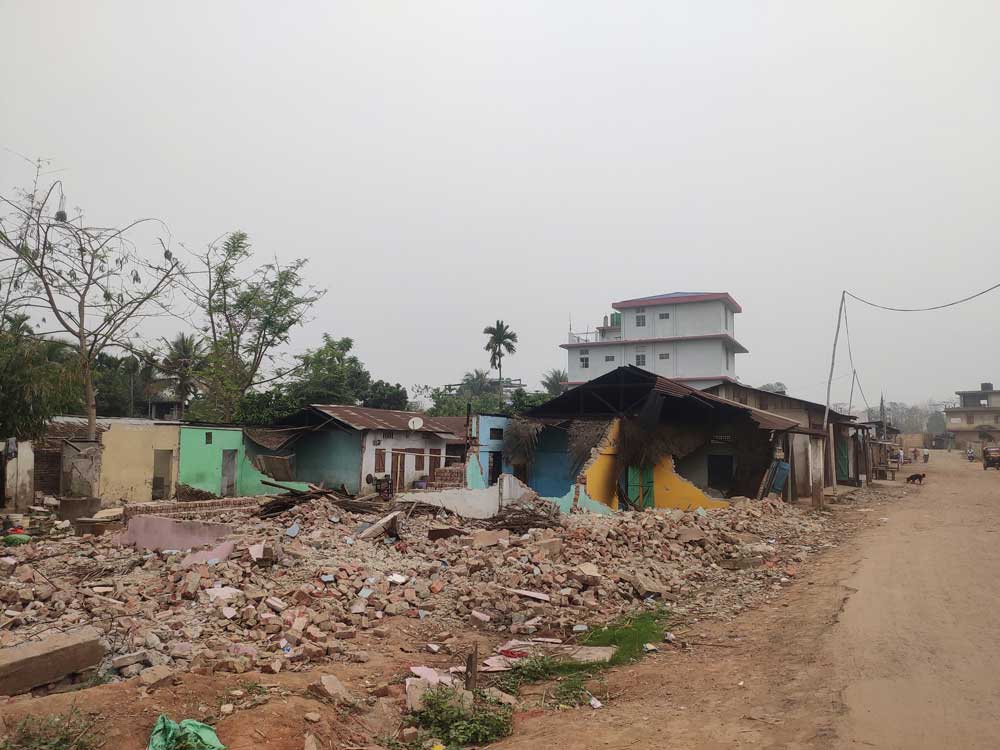