Inclusion of villages within city limits

Protests broke out in four villages in Vadodara in June 2020 against a government notification to include seven villages within the limits of the Vadodara Municipal Corporation (VMC). The dispute started in September 2019 when the VMC general committee passed a proposal to include seven villages Bhayli, Sevasi, Bil, Karodiya, Vemali, Undera and Vadadala within the municipal limits. It was reportedly** **in response to requests by the residents of some newly developed housing societies who wanted inclusion of their areas in city limits for better infrastructure development. Hence, the VMC decided to include the seven villages under its jurisdiction and develop roads in these areas, jointly with the Vadodara Urban Development Authority. However, the proposal met with opposition from a majority of residents of these villages. This was mainly because their inclusion in municipal limits would lead to the dissolution of village panchayats and an increase in the property tax rates. The villagers also alleged that the VMCs move is aimed at increasing its revenue by converting agricultural lands into real estate projects. The village panchayats had written letters to the additional chief secretary of the Urban Development and Urban Housing Department as well as filed a Special Leave Petition in the High Court of Gujarat in April 2020, asking for a reversal of the government notification. While the matter was sub judice, the government issued a notification on June 18, bringing the seven villages within the city limits and under the VMCs jurisdiction. This sparked protests in the villages of Bil, Sevasi, Bhayli, Karodiya and Undera. The protesters gathered in public places, raised slogans, burnt effigies and called for a bandh. The petition was to be heard on June 26, but the state government's move prompted the villagers to revise their petition for quashing the state government's June 18 notification. The high court is yet to hear the case. Jay Bhatt, sarpanch of Bil Village Panchayat, told LCW that the decision to include panchayats within municipal limits was taken without following due process or principles of natural justice. He stated that panchayats are representative bodies established by the Constitution and, therefore, their dissolution, or the inclusion of villages within city limits should be done with the participation and consent of the village panchayats, which, he says, are more accessible to people than municipal corporations. "Also, the property tax under the panchayat is around INR 300500, which will increase to around INR 3,000 under the jurisdiction of the VMC, without any upgrade in services." Another reason Bhatt mentioned for the public opposition to the inclusion move was the fact that the VMC had failed to serve the villages previously included within the city limits. "Under such circumstances, inclusion of new villages does not serve any purpose. The people will lose the services they are getting under the panchayat in exchange of a substandard service by the VMC." The inclusion has now begun spilling over to other spheres, solidifying it. In July 2020, Vadodara's Urban Development and Housing Department notified the rotation of reserved seats in the VMC, ahead of the civic body polls, keeping in mind the increase in the number of voters with the inclusion of the seven villages.

Withdawal of the government notification that includes the seven villages within the city limits.

Constitution of India, 1950
Article 243(Q)(2): [Governor can notify an area as a transitional area based on population, land revenue, etc]
Gujarat Provincial Municipal Corporations Act, 1949
Section 3(2): [A notification made under Article 143(Q)(2) will continue to be in force until otherwise modified]
Gujarat Land Revenue Code, 1879
Section 38: [Collector may notify that certain land is for a special purpose, and the land then cannot be used for any other purpose]
Gujarat Land Revenue Code, 1879
Section 38 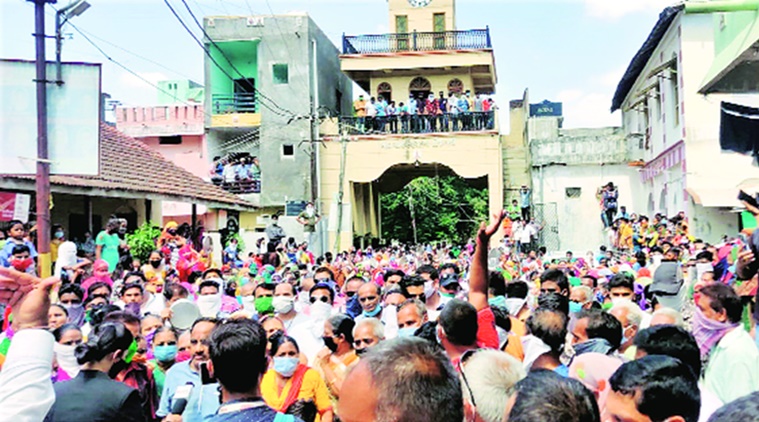