Three years after their land was acquired for the BengaluruChennai Express Corridor Road, more than 5,000 people in the overpasses of the corridor are yet to receive compensation. BangaloreChennai Expressway Santrasta Raitara Horata Samiti (BCESRHS), a local organisation formed by the Karnataka Prantha Raitha Sangha (KPRS) to help the affected families in Kolar, along with farmers, has been demanding that those who have lost their land to the road development project should be provided compensation at the current market price. On May 27, 2015, the Central Government had issued a land acquisition notice under the National Highways Act, 1956. The final notification for land acquisition was issued in 2016. Special land acquisition officers had acquired over 3,700 acres of land in more than 63 villages in Malur, Bangarapete and Mulbagal towns and in Kolar Gold Fields tehsil in Kolar District. KPRS wants the National Highways Authority of India (NHAI) to compensate the farmers at the current market rate as per the Land Acquisition Act, 2013, instead of considering compensation under the guidance value under the National Highways Act, 1956 (the minimum price set by the state government to register a property). The farmers also claim that ever since construction started on the acquired land, the trees and plants are yet to be priced and argue that their value, too, should be based on the current market price, along with the landrelief fund. They have further demanded that farmers holding 500 acres of _bagar hukum _land (government land cultivated without permission) be compensated at the current market rate. KPRS has urged the NHAI to provide free toll admission cards to farmers who have lost their land to toll projects, which will allow them to use the highway without paying a toll fee. BCESRHS adviser G.C. Bayya Reddy said, 'If the problem is not solved by the state government by September, we will appeal to Karnataka Chief Minister H. D. Kumaraswamy on October 3, 2018.' The chief minister had cancelled the appointment; however, the farmers have filed a petition under the tribunal of the Kolar district magistrate. "We will wait until October for adequate compensation. If the farmers do not receive it, we will challenge the case in the High Court," Reddy added. The project aims to reduce travel time on the 90metrewide expressway, which will run parallel to the existing NH4. It is part of the Centre's larger expressway plan, which will build a 1,000km expressway network across the country.

The LARR, 2013 empowers the Collector to determine and award compensation as per the parameters laid down in Chapter IV of the Act. The affected landowners have filed a petition for adequate compensation before the tribunal of the Kolar District Magistrate . 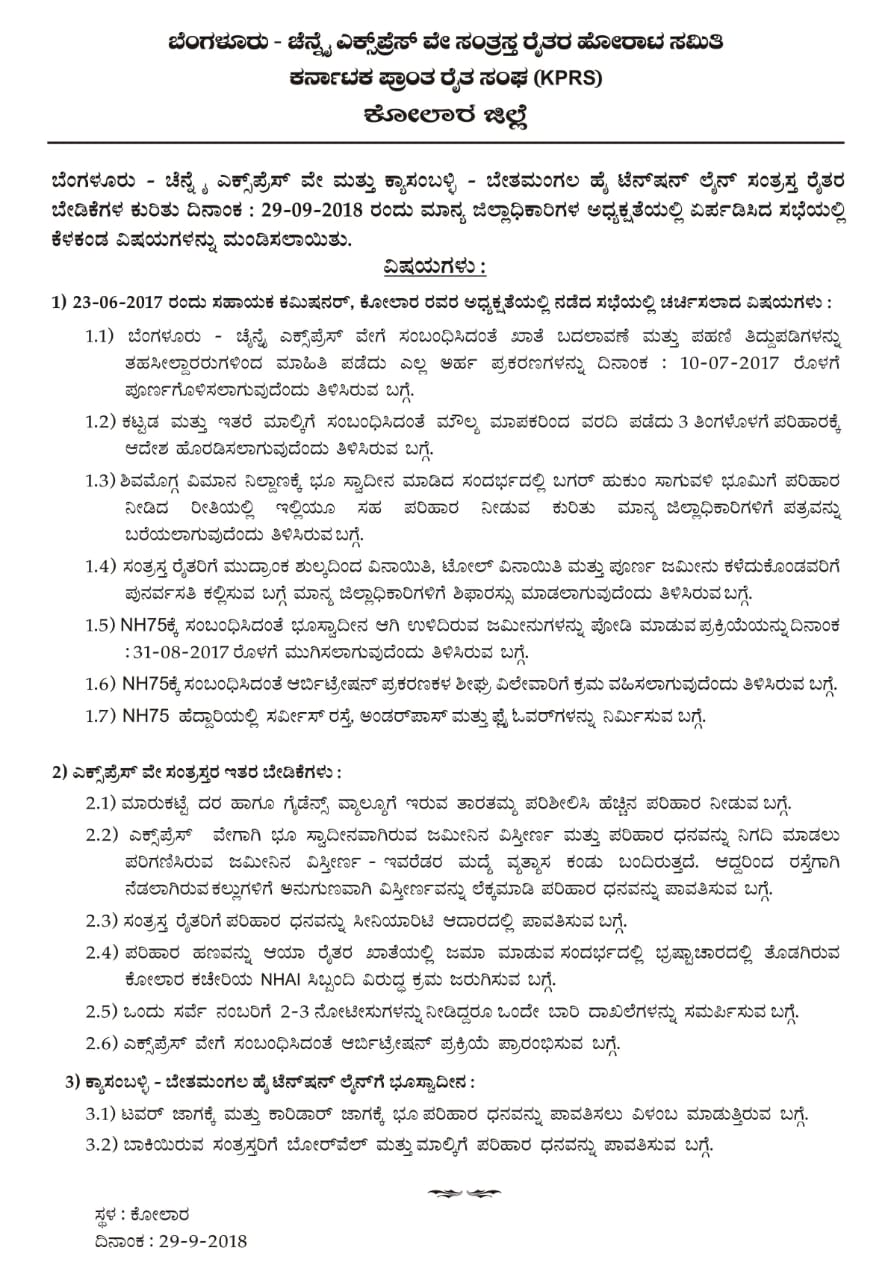