While the work on the project is still ongoing, farmers from all the affected villages are protesting to get a fair compensation. Farmers are demanding that they should be paid compensation based on the circle rate or the market rate, whichever is higher, and additional compensation for not being able to cultivate the land for the six years during which the project could not be commenced. From December 2016 to January 2017, during a protest which went on for almost a month, two of the farmers' leaders Niranjan Singh Rajput and Vishakha Rajput were jailed by the Kanpur police under the Goonda Act.

To protest against the government, thousands of people, including farmers assembled at the dharna site in December 2016. From December 2016 to January 2017, the protest went on, during which, two of the farmers' leaders Niranjan Singh Rajput and Vishakha Rajput were jailed by the Kanpur police.

In 2018, the Yogi Adityanath cabinet approved Adani Transmission to develop the transmission lines for the Ghatampur project, which would feed energy to the Western UP and Agra regions. The power plant is likely to be completed by November 2020. Meanwhile, the Yogi Adityanath government has also decided to set up antipower theft police stations in all the 75 districts of UP.

During the byelection campaign in November 2020, the CM Yogi Adityanath announced that thanks to the Ghatampur plant, every village will get 24 hour electricity by 2022. 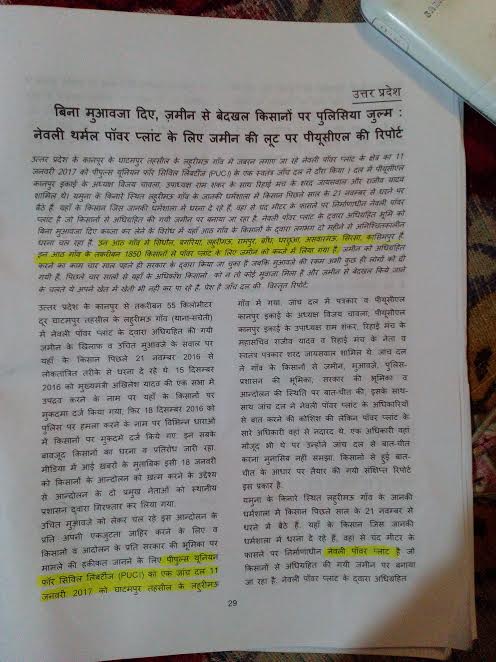