On May 15, 2015, over 200 members from Jat Community attacked and killed six persons including five Dalits over a land dispute in Dangawas village in Rajasthan's Nagaur district. After the intervention of NGOs, civil society and political parties, the issue came to spotlight that year. The land conflict was over 3.77 hectares of land in Dangawas. According to a report in Frontline, the descendants of a Jat family had claimed that the land was sold by a Dalit resident to a Jat resident in 1964. But, according to Section 42 of the 1955 Rajasthan Tenancy Act, property owned by a member of a Scheduled Caste (SC) community cannot be transferred or sold to a person from any other community, including Scheduled Tribes (ST). According to the Dalit family, they had borrowed Rs 1500 from the Jat family nearly 40 years ago by giving land cultivating rights to them. After 20 years, when their family members returned the money back, the Jat family refused to return land. Later, the matter reached a local Court where it remained pending, mainly due to discrepancies in land records. In May 2015, Ratnakar Meghwal, who was killed in the violence, had constructed a dwelling on the piece of land. According to media reports, members of Jat community from the village attacked the Dalit family with arms, sticks, sharpedged weapons. Dalit Women were molested, men were severely beaten. Members of Jat community filmed the entire incident and circulated the video on social media. Considering the gravity of the matter, Rajasthan government handed over the matter to CID and later the case was referred to CBI for investigation. Later CBI filed a chargesheet against 34 accused and arrested 17 of the accused. In January 2018, the trial of the SC/ST atrocity case against the accused began at a court in Nagaur's Merta.

Advocacy (for inclusion in courts), Involvement of national and international NGOs, Protests/marches 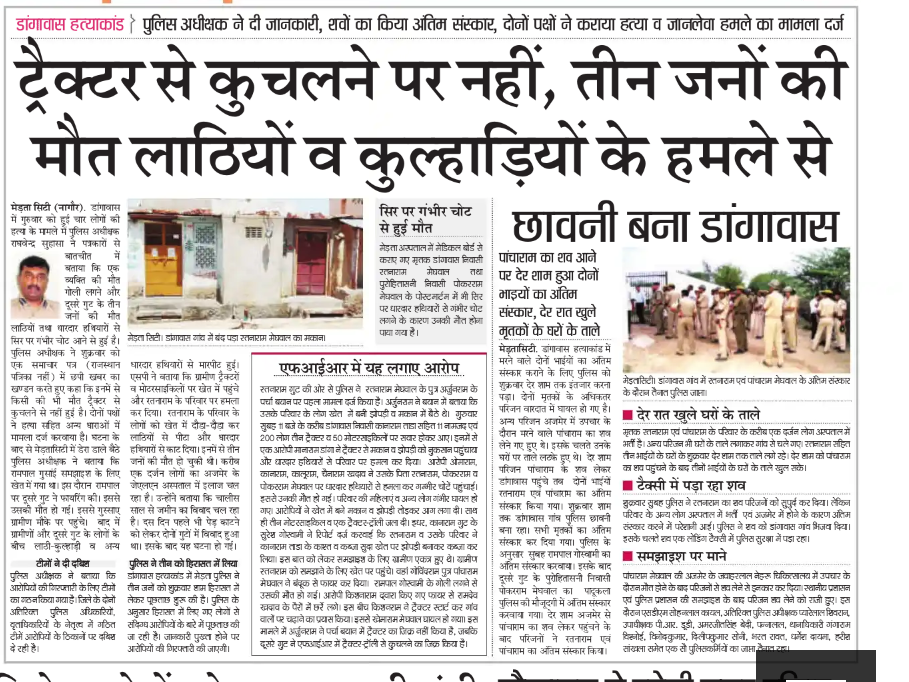