Hasdeo Arand is a large stretch of very dense forest in Central Indias Chhattisgarh. In this forest lie 30 coal blocks, of which three have already commenced mining operations. Parsa Open Cast Mine is one such block, covering more than 900 hectares of forest and agricultural land in Surguja district. The Parsa block operates under Rajasthan Rajya Vidyut Utpadan Nigam Limited (RRVUNL), a subsidiary of Adani Enterprises Limited, with an aim to produce five million tonnes of coal per annum (MTPA).  The tribespeople, civil society organisations and political outfits have vehemently opposed the diversion of forestland for coal mining. They have raised concerns over the irreversible damage to the ecology of the forest, its biodiversity as well as to the life and livelihoods of the communities dependent on Hasdeo Arand for generations. At the same time, the forestdwellers have been demanding land titles under the Forest Rights Act, 2006. In 2010, the Ministry of Environment, Forests and Climate Change (MoEFCC) identified Hasdeo Arand as a nogo region or miningprohibited zone. However, the ministry scrapped the provision in 2011 and granted Stage I forest clearance to Tara, Parsa East and Kante Basan (PEKB) blocks, reportedly under pressure from other ministries.  In March 2012, the MoEFCC granted Stage II clearance to the PEKB block for open cast mining on over 2,000 hectares of land, which was likely to affect more than 400 families in five villages in Surguja district.  Opposing the project, a local lawyer filed a petition against the clearance in the National Green Tribunal (NGT). The NGT directed the MoEFCC to seek fresh advice from the Forest Advisory Committee (FAC) and ordered the suspension of all mining activity in the area till the MoEFCC passed further orders following the law. However, the Supreme Court put a partial stay on the NGT decision in 2014. It stated that mining work need not be suspended but that the rest of the NGT guidelines must be complied with. In January 2015, 20 Gram Sabhas (Village Assemblies) passed resolutions opposing the auction of coal mines in the Hasdeo Arand region. The resolution stated that the mines violated the provisions of the FRA and, therefore, they refused to consent to the mines.  In January 2016, districtlevel authorities revoked the community forest rights for Ghatbarra, one of the affected villages, citing the cause of disturbance to mining operations. The people opposed the decision, calling it unconstitutional.  In August 2016, the RRVUNL sought forest and environmental clearances for the Parsa coal block, which intensified the protests. The villagers organised several public meetings and appealed to the state and Union government to curb the impact of the mines and improve the implementation of the FRA and Panchayats (Extension to Scheduled Areas) Act, 1996.  In December 2016, the company also applied to expand the capacity of the PEKB mines from 10 MTPA to 15 MTPA. The MoEFCC granted environmental clearance to the project in August 2018, despite public opposition. After much deliberation, on January 15, 2019, the FAC also decided to grant inprincipal approval to the Parsa coal block on the condition that the state must confirm the presence or absence of very dense forest in the area. Notably, the affected Gram Sabhas did not give their consent. Regardless, on February 13, 2019, the MoEFCC granted Stage I clearance to the project.  In defiance, residents of 20 villages protested against the governments decision in May 2019 under the banner of Hasdeo Arand Bachao Sankarsh Samiti. Between October and December that year, they staged multiple sitin protests against land acquisition for coal mining. According to Alok Shukla, convener of Chhattisgarh Bachao Andolan, the settlement of forest rights of the Gond tribe remains incomplete.  However, StageII forest clearance for the project is pending, without which mining activity cannot start. But the land acquisition is reportedly underway.

Forest (Conservation) Act, 1980
Section 2 [Restriction on the use of forestland for non-forest purposes]
Provisions of the Panchayats (Extension to Scheduled Areas) Act, 1996
Section 4(e)(i) [Programmes and projects for social and economic development to be approved by the Gram Sabha]
Environmental Impact Assessment Notification, 2006
Paragraph 2 [Prior environmental clearance required by appropriate authority for new projects falling in the Schedule]; Section 7 [Environment Impact Assessment to be in accordance with the procedure laid in Section 7]
Mines and Minerals (Development and Regulation) Act, 1957
Section 11A [Procedure to grant lease for coal mining by Union government; permit from the state government also necessary]
Scheduled Tribes and Other Traditional Forest Dwellers (Recognition of Forest Rights) Act, 2006
Section 3 [Rights of forest-dwelling Schedule Tribe, including entitlement over land]
Scheduled Castes and Scheduled Tribes (Prevention of Atrocities) Act, 1989
Section 3(1)(v) [Offence of wrongful dispossession of a member of Scheduled Tribe from their land or premises]; Section 3(1)(xv) [Offence of forcing a member of scheduled Tribe to leave their house, village or other place of residence]; Section 4 [Punishment for neglect of duties under the Act by a public servant]
Section 41 [The section lays down stricter and special provisions for land acquisition from Scheduled Castes and Scheduled Tribes, including requirement to make detailed development plan and to gain approval from the local authority]

Claims for community forest rights were filed under the Forest Rights Act, 2006.

Cancellation of Community Forest Rights under the Forest Rights Act 2006 for Adivasis and Other Traditional Forest Dwelling People for the Village Ghatbarra in the Hasdeo-Arand region. 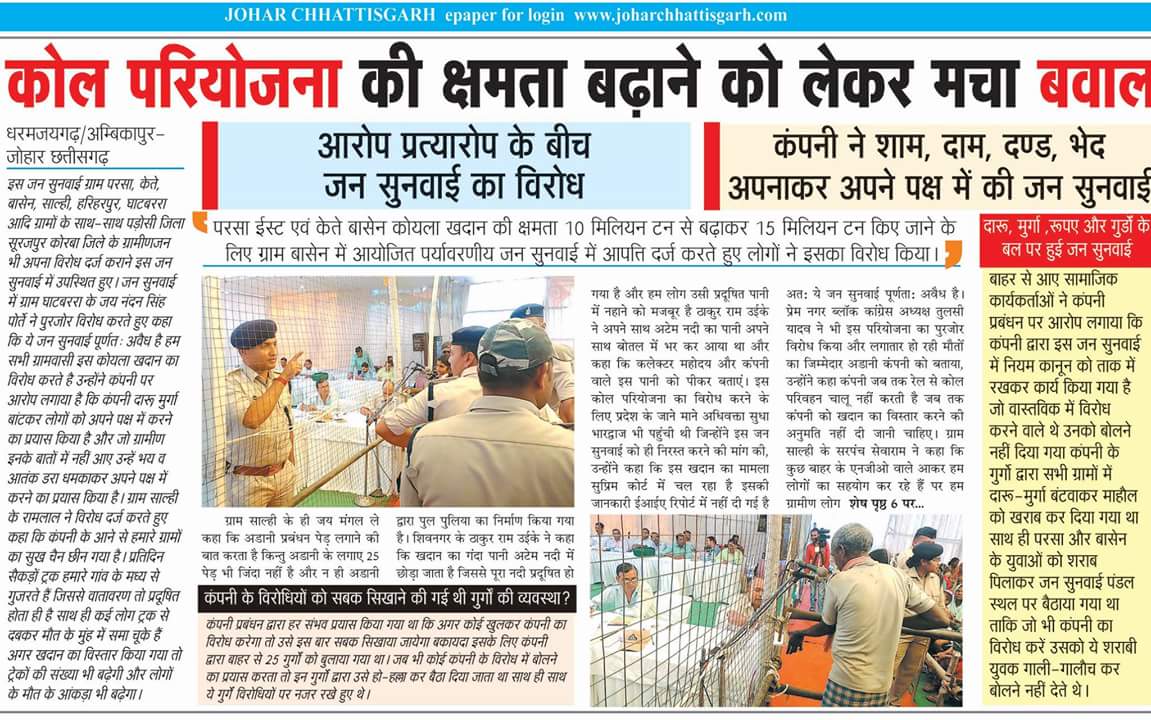