Residents of 12 villages within the periphery of the Mukundra Hills Tiger Reserve are refusing to relocate from their villages unless they are given adequate compensation. The Forest Department is planning to reintroduce tigers into the Reserve, which had previously lost all its tigers. In June 2017, the villagers had requested the Government for a revised compensation package as they are unhappy with the current one which conforms to the norms laid down by the National Tiger Conservation Authority. An article dated 4 March, 2018, states that the Centre has approved 100 hectares of land near Kota to be the area to which the villagers will be rehabilitated. However, the compensation package remains unchanged and the villagers are refusing to shift out of the reserve. Mukundra Hills Tiger Reserve (MHTR) is the third tiger reserve of Rajasthan after Sariska and Ranthambore. MHTR was notified as a Tiger Reserve in 2013 by the State Government. Spread over 759.99 square kilometers, comprising a core area of 417.17 square km and a buffer area of around 342.82 square km. Of the total 14 villages that come within the periphery of the MHTR, only two, Lakshmipura and Kharli Baori, have been rehabilitated. Based on the norms set by National Tiger Conservation Authority's (NTCA), the Forest Department has promised to pay Rs 10 lakh and also assured to provide compensation for land as per Government rates. The villagers, however, are unhappy with this and have been demanding a better compensation package. As per a report dated December 6, 2017, District Collector of Kota, Rohit Gupta, had said that a revised compensation package had been sent to the State Government for approval. Deputy Conservator of Forests, MHTR, SR Yadav, confirmed that the revised package had been sent to the Union Government through the State Government. He further added that "relocation of villagers was priority but it has to be voluntary". However, the compensation package remains unchanged and there are no updates on the revised package that was requested. 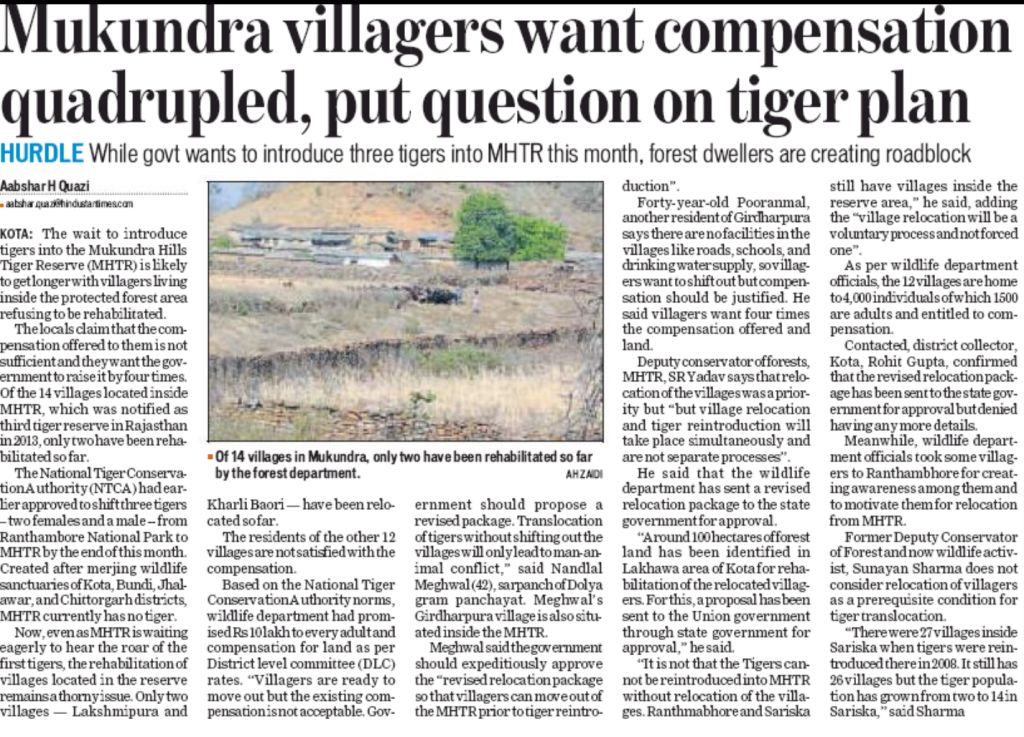