The construction of the 144.7 Km long Jalandhar-Moga-Barnala National Highway-71 (NH-71) started in 2016. The project soon drew media attention as it is likely to uproot 22,700 trees. The project was expected to affect more than 10,000 people** **whose agricultural land, commercial and residential properties were acquired for this project in Jalandhar, Moga and Barnala districts. In April 2016, affected community members staged a protest by blocking the Moga-Barnala NH-71.

In the same year, an application was also filed in the National Green Tribunal (NGT) by Dr. Amandeep Aggarwal and the Peacock Environment and Wildlife Protection Society, a civil society organisation. The applicants sought a direction to the State government for preventing tree felling for road widening projects. While their application was with reference to the Zirakpur-Bhatinda expressway only, the NGT directed that the state government could undertake further tree felling only after seeking prior permission from the NGT. This translated into halting of the widening of NH-71 project. The Punjab government approached both the Supreme Court and the Punjab High Court regarding this issue. The Supreme Court delivered its order in 2016, while the High Court in 2017. Both courts cleared the tree felling activities for the widening of NH-71.

LCW visited Moga in August 2022 and found that the residents of Machike village, one of the affected villages, continue to suffer because of the highway. The village residents claim they have been protesting at NH-71 site since the last eight months. They are concerned about the way in which they have been deprived of basic necessities due to the widening of the highway.

Satnam Singh an affected villager, told LCW that the highway has divided the village into two parts. On one side, the village is elevated at a higher level, while the other side remains at a lower level. This results in water logging in the lower side of the village in the absence of adequate rainwater drainage mechanism in place, impacting everyday commute. Further, Satnam noted that important spaces such as the village Gurudwara and the Shamshaan Ghat (cremation ground) were inaccessible because of the construction. The highway has impacted lives of children as well as they are unable to go to the village school from one side to the other. According to Satnam, the division of the village into two halves also makes it hard for them to access water sources.

Their main demand is that an over-bridge be constructed to connect the two sides of the village. Currently, state officials have arranged for them a makeshift stairs for this purpose. It is however failing to fulfil the needs of the village residents. This demand has been placed before the authorities since 2017 and relevant records such as a mang pattar** **exist with the residents of the village. Even basic transport facilities have been taken away from the villagers as a result of this highway as the village bus stand is not accessible anymore. The protestors feel the project reflects poor planning and inconsiderate behaviour of relevant authorities towards the residents of such villages.

Forest (Conservation) Act, 1980
Section 2 [Restriction on diverting forest for that deals with diversion of forest land for non forest purposes] 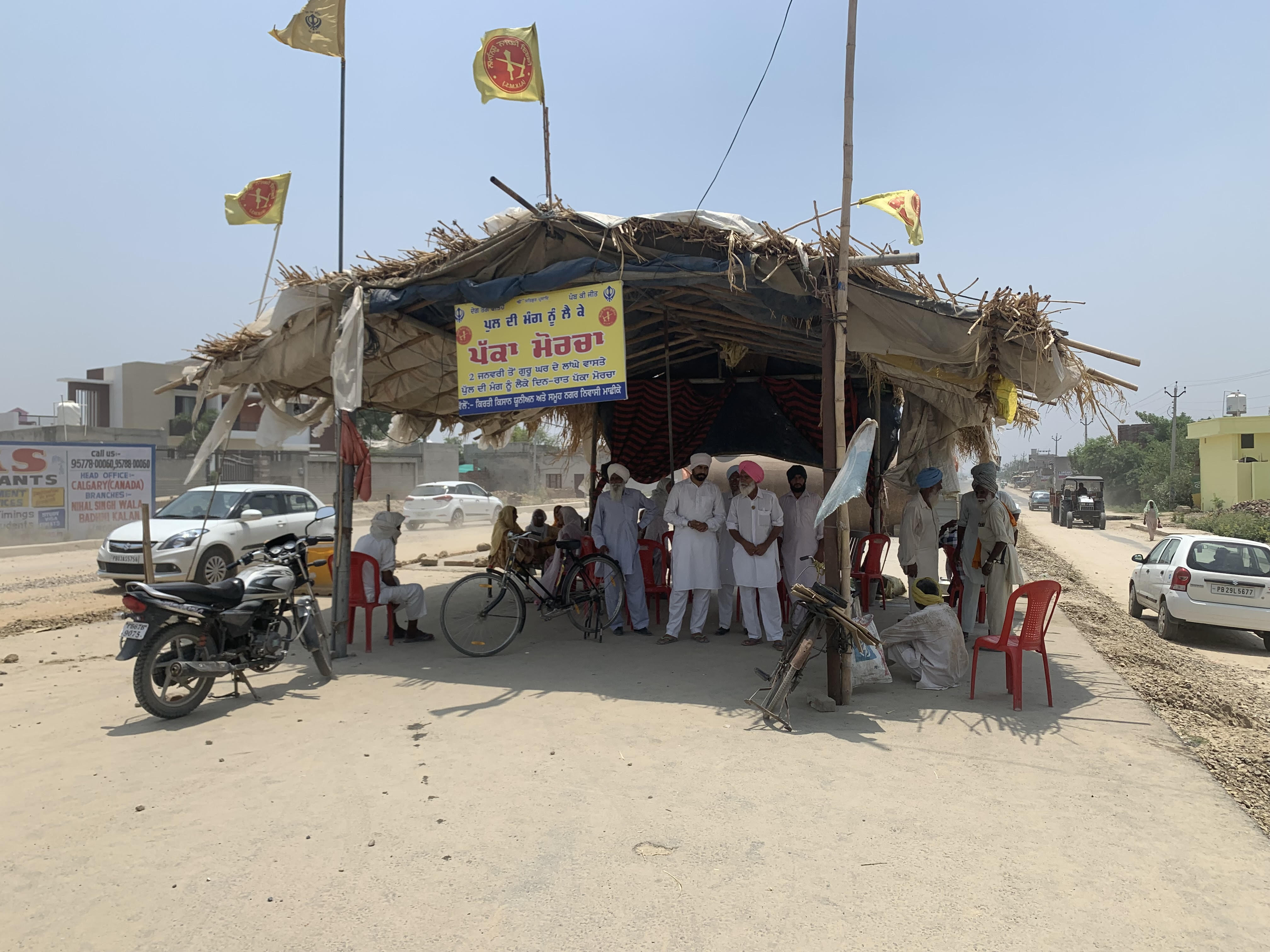 Protesters at the protest site