Telangana's Greater Hyderabad Municipal Corporation (GHMC) and its Roads and Buildings Department have jointly been working on a 1.6kilometre flyover as part of the Strategic Road Development Plan to ease traffic flow between Glonaka and Amberpet. To this end, on May 2, 2019, the GHMC demolished a 200yearold mosque, popularly known as MasjideEkKhana, invoking tension between Muslim groups and members of Hindu rightwing organisations. According to the Telangana State Waqf Board members, who claim ownership over the land, they were not informed prior of the decision and the demolition hurt their religious sentiments. However, the GHMC claimed that it had already paid INR 2.5 crore as compensation to individuals living in the area, mostly shop owners, who the Waqf Board considers 'encroachers'. Infuriated by this, All India MajliseIttehadul Muslimeen (AINIM) and Majlis Bachao Tehreek, with the involvement of a few political parties, held multiple protests claiming ownership of the land and demanding the mosque's reconstruction. Speaking to The News Minute, Waqf Board CEO Shahnawaz Qasim said, The boards position on this matter is very clear. We have a Survey Commissioner Report from 1964 as well that shows the land is Waqf property. Although the reconstruction work began, it was abruptly halted by a stonepelting clash between Hindus and Muslims, which pushed the police to detain some protesters and maintain tight vigil. The Board claimed it had informed the GHMC about the encroachers, a detailed letter of which was sent to the assisstant city planner in May 2018. The Board said it did not receive any notice from the GHMC about the demolition or ex gratia paid to individuals who sold the land. It also argued that the GHMC did not even consider approaching the court over the land dispute. On July 29, 2019, a delegation of Muslim religious leaders met State Home Minister Mahmood Ali who assured to resolve the issue and construct the mosque in the near future. In July 2020, Muslim groups demanded the removal of the Waqf Board chairman, pointing at the failure of the Board to protect their mosques.

Demand to get back acquired land, Complaint against procedural violations 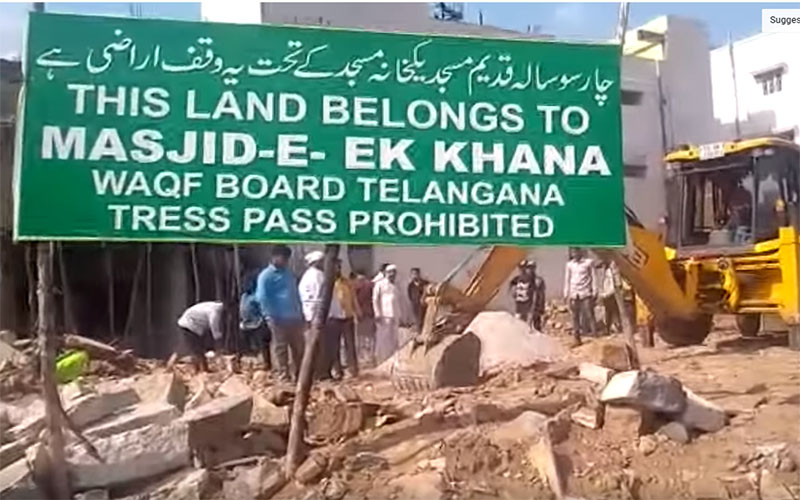