On September 25, 2019, more than 100 people living under and around Tallah Bridge, in what is known as Tallah basti, were ordered to evacuate the area with no written notice. The police, along with Tarun Saha, one of the borough chairmen of the Kolkata Municipal Corporation (KMC), visited the area overnight and asked them to vacate their houses, threatening to throw out their belongings. Tallah bridge is located on BT Roads Nazrul Pally lane. The bridge is a key link between Shyambazar and areas further north, leading up to Barrackpore. The railways and the PWD are jointly responsible for the maintenance of the 57yearold bridge. In September 2018, the Public Works Department (PWD) observed that the concrete in the bridge had peeled off in many places, leading to a corrosion of the steel reinforcements. It identified the bridge as vulnerable, along with a clutch of other bridges, and suggested repairs. On November 6, 2019, the PWD issued a written notice, which stated that the people living under the bridge were illegally occupying the area and that they should be removed or appropriate action would be taken. The move was seen as a runup to the repair work of Tallah Bridge. Meanwhile, between September 25 and November 6, the police visited the basti regularly and continued to threaten the residents. On a few occasions, the police even threw out personal belongings. Some residents eventually moved out of the area in the face of the harassment and shifted to dilapidated transit camps at the railway yard and near Chitpur canal. On January 2, 2020, following a meeting between state chief secretary Rajiva Sinha, railway engineers and the PWD, it was decided that the PWD would demolish Tallah Bridge as it has lost much of its loadbearing capacity. The demolition was scheduled to start on January 5 but was later postponed to February. Ahead of the demolition, the houses of the daily wage labourers were demolished by the PWD on November 11, five days after the written notice was issued. The labourers are now scattered in three surrounding areas. According to the residents, the KMC had failed to deliver on its promises.** ** Kamala Das, one of the inhabitants of the transit camp, told Land Conflict Watch that Saha had promised them that their houses would not be demolished and that they could return after the repair of the bridge was completed. He had also assured them that they would be relocated to flats in a building. "Once we learnt that we would instead be moved to transit camps, Saha promised us electricity throughout the day as well as tin sheds for roof. But even those were not fulfilled," she adds. In the name of rehabilitation, the PWD provided the labourers temporary housing in the transit camps, made with long bamboo structures covered with black tarpaulin sheets. But these lack proper toilets, not to mention that plastic is combustible and there is no fire extinguisher in these shelters. Within a few hours of rain, the sewers around the tents get filled. Thirtyfiveyearold Fultoshi Hajra, one of the inhabitants, told Land Conflict Watch, The children have to walk to the toilet, which is far from their tents, and it is unsafe to do so at night. As the tents are made of plastic, anyone can tear through them with blade or scissors. In November 2019, the evicted people formed a committee called Basteevasi Shramjivi Adhikar Raksha Committee – Tallah. Uttam Das, a member, told Land Conflict Watch, We have been living under the bridge for two generations. My father is a cancer patient; what will I do now? In the summer, how will people survive without electricity? Almost everyone has a valid identity card, such as voter card, Aadhaar card and ration card. Everyone has gas and electricity connections. Even with all these proofs, we are homeless today. On November 25, 2019, following a petition at the Calcutta High Court by two residents of the basti, Sabyasachi Bhattacharjee, a judge at the court, ordered the state government** to consider the case on humanitarian grounds and directed it to explain through an affidavit the action it had taken on rehabilitation within 15 days. The KMC's promise **of rehabilitation remains unfulfilled to date. The evacuees have demanded a written assurance from Saha stating that they would be allowed to return to their old area after the completion of the bridge work. Saha is yet to respond. The construction of a new bridge is slated for June 2019. This is estimated to be about six metres wider than Tallah Bridge and will be built at a cost of INR 268.23 crore.

Public Premises (Eviction of Unauthorised Occupants) Act, 1971
Section 4 [Requires the estate officer to issue a notice of show cause against proposed eviction]; Section 5 [An order of eviction shall only be made after an opportunity has been given to the unauthorised occupant to show cause, after personal hearing]
Basic Principles and Guidelines on Development-Based Evictions and Displacement, 2007
Guideline 48 [Any legal use of force during an eviction must respect the principles of necessity and proportionality]; Guideline 50 [Property and possessions left behind involuntarily during an eviction should be protected against destruction and arbitrary and illegal appropriation, occupation or use.]; Guideline 52 [After an eviction, the party responsible for eviction must provide just compensation and sufficient alternative accommodation.]

Police visited the basti at night and ordered people to evacuate, threatening to throw away their belongings if they failed to comply. In the days that followed, the police did throw away personal belongings of people.

Tarun Saha, one of the borough chairmen of the Kolkata Municipal Corporation, told Land Conflict Watch that people in the basti were living there illegally and were scattered in three surrounding areas after their eviction and that they were living in tents with plastic roof. He added that the corporation would arrange a tin shed later. 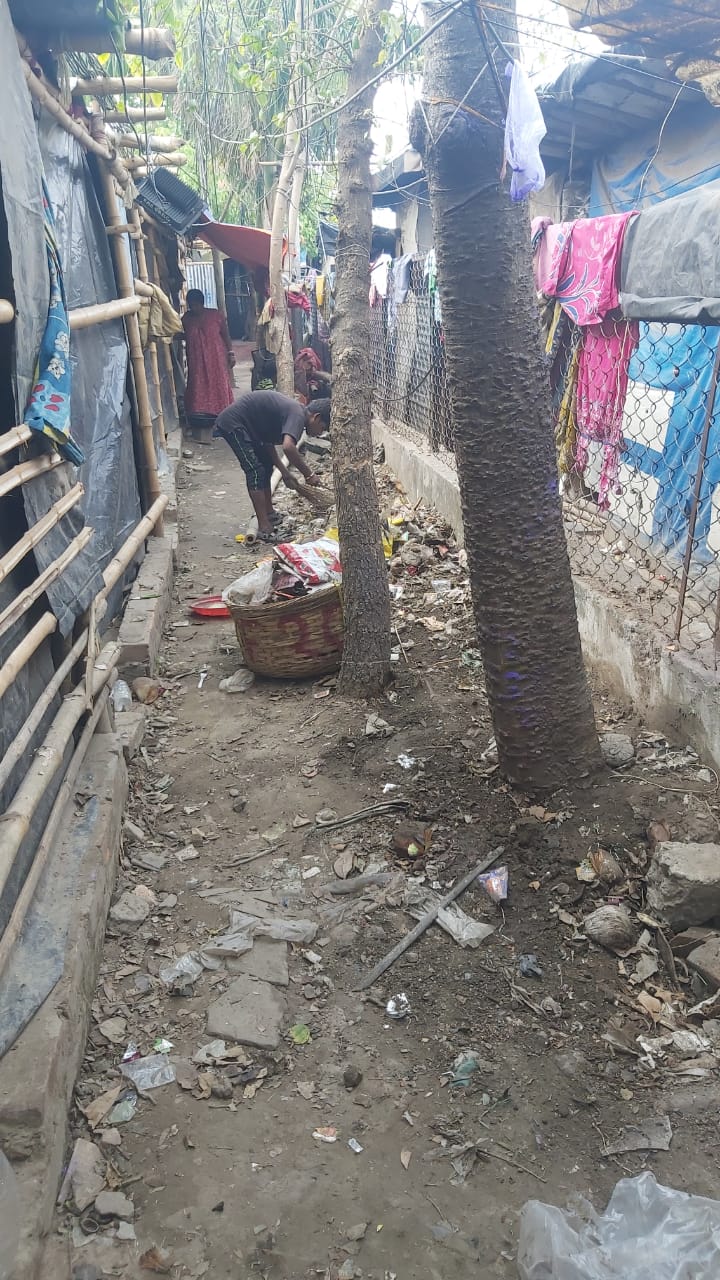