An oran is large area of land in a desert that supports multiple species of animals through natural resources such as water and trees. One such area in Rajasthan, named after local deity Degray Mata, has been under contention since 1999. According to Parth Jagani, a history enthusiast, King Vikramdev had donated this land, spanning 15,180 hectares (60,000 bigha) around the Degray Mata Mandir as oran in 1419. But the land records of the state government list only 24,000 bighas as oran. When the land was measured after independence, the land was listed as farmland, but the village residents did not think it to be a cause of concern then. It was when a private solar power company started its project here and started felling trees in 1999, we looked at the land records and found the root of the problem," Durjan Singh, secretary of Oran Bachao Samiti and Degray Mandir Trust, told the media.
According to a Supreme Court judgement of 2018, orans in the state are to be classified as deemed forests and cannot be used for any other purposes. The local populace believes that the government did not list the remaining 36,000 bighas as oran as it wanted to use the land to set up transmission lines, power grid stations and renewable energy plants, which have increasingly come up in the region over the years. The Oran Development Institute and the Ecology Rural Development and Sustainability Foundation** **had filed a petition in the National Green Tribunal (NGT) in 2020. It argued that the disputed oran is home to the endangered Great Indian Bustard and that the bird needs protection from hightension wires that have cropped up in the region. In addition, a large number of livestock depend on the _oran _for grazing. We are already facing a reduction in the number of camels. What will the remaining camels eat if the pastures are not there? Sumer Singh Bhati, a local environmental activist, told the media. I have 400 camels, and in the 12 villages nearby, 5,000 camels and 30,000 sheep are dependent on the oran. If it is not spared, there would be no place for our camels to graze, he added. The petitioners had organised several protests in which the residents of the area participated. They informed the district magistrate about the problems they would face if the _oran _is not saved. The case is pending with the NGT. The Tribunal has given an interim order to the Power Grid Corporation of India (POWERGRID) to stop laying more power cables in the region. It also referred to a Supreme Court order of April 2021, in which the apex court asked companies to lay underground wires for the safety of birds and animals, and a committee regarding the same was formed. However, the petitioners have argued that POWERGRID has not paid heed to the court order or considered the recommendations of the committee. They have demanded that the entire land area of 60,000 bighas be listed in the government records as oran to ensure its conservation. "Our _oran _is several hundred years old, and we are constantly struggling to save it. Our sole request to the government is to protect it. It houses a lot of wild animals, vegetation and ponds. This is the centre of our faith, Girdhar Singh, the priest of the Degray Mata temple was quoted in the media. LCW reached out to the DFO, Desert National Park, Jaisalmer, and Stanley Mathews, chief general manager, POWERGRID, but did not get any response.

Demand for the entire land area to be registered in land records as a sacred grove.

Forest (Conservation) Act, 1980
Section 2: [Restriction on the dereservation of forests or use of forestland for non-forest purpose]
M. K. Ranjitsinh v. Union of India (WP (C) No. 838 of 2019, Supreme Court)
The Supreme Court issued guidelines to protect certain species of birds on the verge of extinction, partly due to the threat posed to them by overhead power transmission lines. The measures suggested by the court included laying underground transmission lines wherever possible and attaching diverters in case of overhead lines. The court recommended that CSR and CAMPA funds be used to finance these measures.
Biological Diversity Act, 2002
Section 36 [Union government to develop national strategies, plans etc. for conservation of biological diversity]; Section 38 [Power of Union government to notify threatened species in consultation with state governments and provide adequate steps for rehabilitation]
In re: T.N. Godavarman Thirumulpad v. Union of India and Ors. (WP (C) No. 202 of 1995, Supreme Court)
As per this order, the state of Rajasthan accepted a recommendation to include sacred groves, such as orans, in the category of ‘deemed forests’.

LCW reached out to the DFO, Desert National Park, Jaisalmer, and Stanley Mathews, chief general manager, Power Grid Corporation of India, but did not get any response. 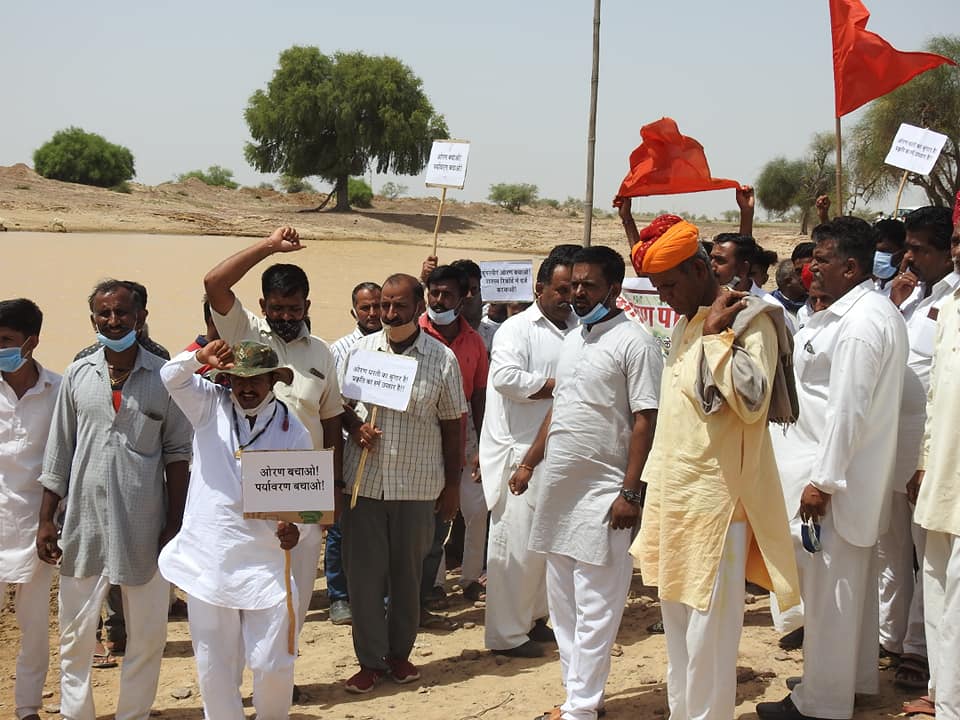