On March 11, 2022, farmers of Pissurlem, a village in the mining belt of North East Goa, protested to save their land and livelihoods, which have been affected due to declining water quality and quantity due to years of mining in the area. They have been raising these concerns with various government departments since 2013. Hanumant Chandrakant Parab, President of Pissurlem Shetkari Sanghatna, recently approached the Goa bench of Bombay High Court seeking relief for the villagers, for the second time in two years. The application's demands are centred around compliance with the order issued by the High court in 2020 on the matter. The applicants' major demands include improvement in water provisioning in the area by diverting water from abandoned mining pits to their agricultural fields, removal of silt from their fields and regular supply of potable water to their homes.

Water supply in the area was affected due to iron ore mining in the region. In 2020, the High Court passed a verdict in favour of Pissurlem's farmers and directed the state to divert water from abandoned mining pits to the affected fields. Once known as the rice bowl of Sattari taluka for its paddy fields, Pissurlem has seen declining crop yields with many families moving out of traditional farm-based occupations. Mechanised mining in the region began in the 1990s, which has impacted Pissurlem's ecology. This occurred because the iron ore in the region is also an important aquifer for the area. Simply put, the mineral source for mining and groundwater are the same. The extraction of iron ore in the area was carried out through open cast mining. This requires the digging of a deep pit that extends much beyond groundwater levels, causing the water from the aquifers to flow into the mining pits instead of nearby streams and rivers. Thus effectively depleting the water table and disrupting irrigation channels. This along with the accumulation of mining silt in the fields has led to a decline in the yield, Hanumant Parab told LCW.

Since the mining ban in 2012, villagers tried to restart cultivation in the fields but found conditions for agriculture had severely deteriorated. According to Parab, they raised the issue with the Deputy Collector in 2013, Chief Minister and the Directorate of Mines in 2014. In July 2019, farmers also wrote to the State's Chief Minister, Pramod Sawant demanding a solution for their water problems.

In 2020, Parab approached the High Court on behalf of the farmers, contending that the District Mineral Foundation (DMF) had failed to act on their plea for ensuring welfare of areas and people affected by mining activities. On November 2, 2020, the High Court disposed Parab's application and directed the DMF to act on the farmer’s demands like diverting water from the pits to the village, and setting up a water treatment plant. According to Parab, the village now receives water through tankers but the supply is irregular and sporadic. "No other action has been taken in the last two years", added Parab.

In March 2022, villagers alleged that Sesa Goa, a subsidiary of Vedanta, had received a tender to transport iron ore through the village. The ensuing transportation damaged surviving plantations and fences in the village, residents complained. This renewed activity has further angered landowners, especially in the absence of any action on the concerns they have been raising since 2013.

On March 4, 2022, Pissurlem residents submitted a memorandum to the Deputy Collector and Mamletdar, demanding immediate compliance with the 2020 High Court order and halting iron ore transportation. They have also demanded that mining companies release the compensation due to them for crop loss, which has been pending since 2018. On March 11, 2022, around 52 protesters gathered at the mining site, where they were detained by the police and Hanumanth Parab was allegedly assaulted.

On March 28, 2022, Parab filed a fresh PIL in the High Court seeking relief from the water shortage caused due to mining activities in the area. The next hearing is scheduled in July 2022.

Demand for facilities such as immediate potable water

In an earlier case (PIL WP 30/2017), the Bombay High Court (Goa Bench) directing the District Mineral Foundation to act upon the representations made by affected parties. A new PIL was filed in 2022, seeking expeditious grant of NOC to the PWD to set up a water treatment plant in the area. The Petitioners have also asked for directions to immediately supply adequate potable water to each household in Pissurlem village. The case is presently only in the preliminary stages of hearing.

On March 11, villagers had gathered at the mining areas to protest against ongoing iron ore transportation and non-compliance with the 2020 HC order. Hanumant Parab, who was leading the protest, had asked the Director of Mines to visit the area for inspection. Around 52 protestors had gathered at the site, where they offered prayers to the rakhandar (local spirit guardian) for the improvement of their fields. Eventually, the Valpoi police arrived and allegedly detained several villagers gathered there. Parab has alleged that he was taken to a separate lock up where he was beaten up. The other detainees said they were asked to “sign a document” and released later in the day. The police were led by Deputy Superintendent of Police, Sagar Ekoskar, who has earlier been involved in violence against villagers protesting the upcoming IIT campus in Melauli. Subsequently Director General of Police Indra Dev Shukla ordered an inquiry into the brutalities. 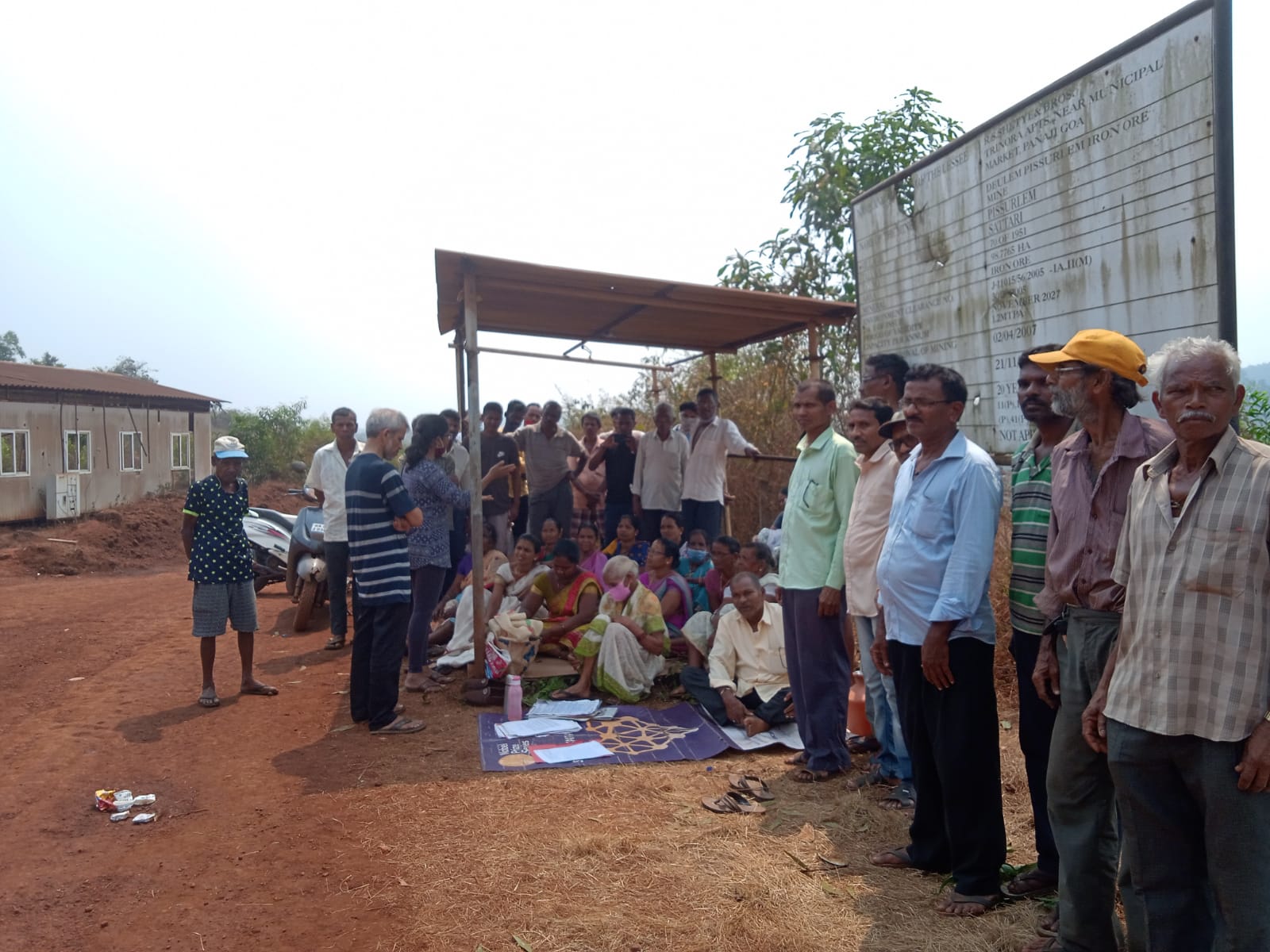 Activists and villagers gathered at the protest site 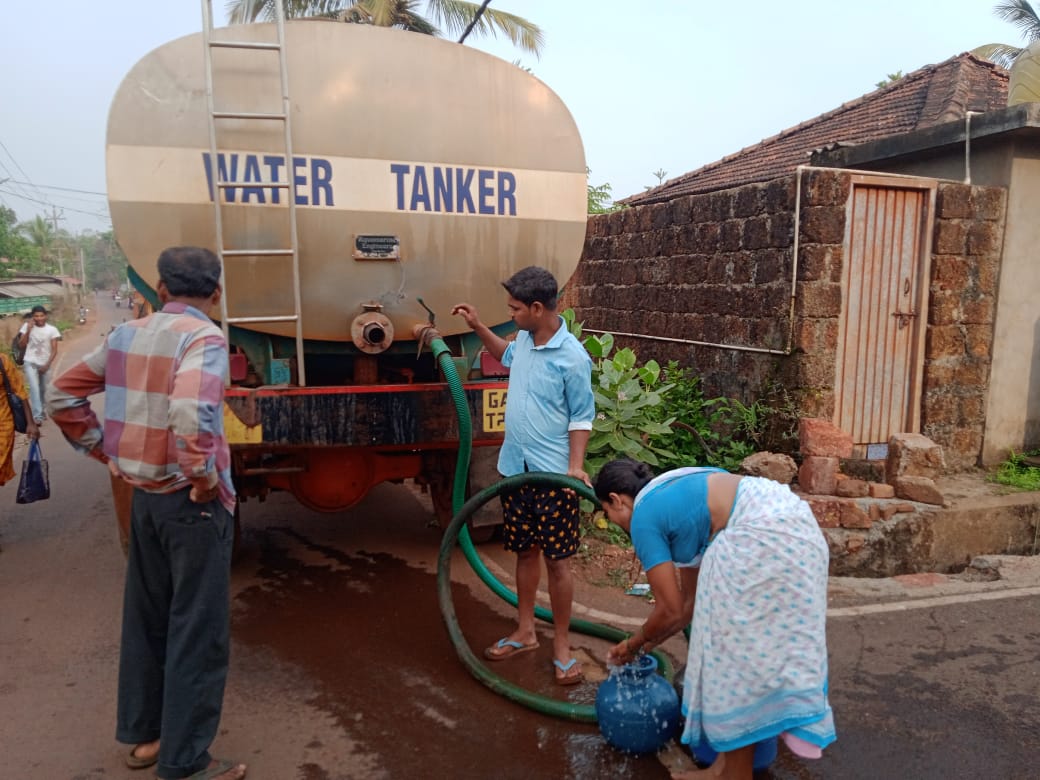