Construction of pipelines and canals to divert river water

Seven droughtstricken villages in Tumkur districts Tiptur tehsil have protested against the acquisition of land for the Yettinahole Integrated Drinking Water Project as government officials and politicians have not accepted their demand of receiving 1.5 TMC (thousand million cubic feet) water from the project in exchange for their land and have neither clarified the amount of compensation that they will receive for the same. The project is currently in the survey stage in Tiptur, but farmers are already boycotting such procedures. Land is proposed to be acquired from Bommalapura, Madihalli, Geddalahalli, Edenahalli, Halepalya and Kanchaghatta villages in Tiptur, which is grappling with depleting groundwater levels, but the farmers from these villages will be unable to access any water from the project. Yettinahole is a tributary of the Netravati river in Dakshin Kannada district. The government plans to divert 24 TMC, or 672 billion litres, of the river water to provide drinking water to the droughtprone districts of Kolar, Bengaluru Rural, Chikkaballapura, Hassan and Tumkur through pipeline and canals. If executed, the project will submerge many villages, affecting farmlands and displacing families. Even fisherfolk are expected to be affected due to the reduced water flow in catchment areas of the stream. According to activists, the 91 families in Tiptur from whom land will be acquired fear that they may not be compensated** **as per the Land Acquisition, Rehabilitation and Resettlement (LARR) Act, 2013, because government officials have not yet announced the compensation amount. They have demanded that the government lay out the details of the compensation before they proceed with the survey. They have also accused the government of trying to rush through the work without discussing the rehabilitation and resettlement processes. They told LCW that there is an attempt to lure villagers by paying a small amount and getting tripartite agreements signed among three parties farmers, contractors doing the civil work and Special Land Acquisition Officer. On May 24, 2019, the National Green Tribunal gave the green signal to the project. The Ministry of Environment, Forests and Climate Change also approved the project following a spot inspection carried out in December 2015. Local organisations, such as Yettinahole Horata Samiti, have held several meetings with the affected farmers in Tiptur and tried to educate them about the land acquisition law. The Samiti, along with the Yettinahole Protection Committee and others, have also organised several demonstrations in Tiptur and blocked roads as a form of protest. On June 10, 2019, activists were detained for a few hours for protesting along with some 1,000 farmers in front of the Tiptur Municipal Council office.   On December 24, the Yettinahole Horata Samiti submitted a memorandum to the Tiptur Assistant Commissioner underlining their demands, which included fixing of compensation amount before the start of work, adequate compensation to land owners under the LARR Act and cancellation of surveys done in the absence of land owners. The project had received the Cabinet's approval in 2012 and reports suggest that it is likely to miss the June 2020 deadline of completion of the first phase by at least a year due to delays in land acquisition.

Demand for water in exchange of land, demand for compensation amount to be determined and notified prior to acquisition

Right to Fair Compensation and Transparency in Land Acquisition, Rehabilitation and Resettlement Act, 2013
Section 16: [Preparation of Rehabilitation and Resettlement Scheme]; Section 27: [Determination of amount of compensation]
Biological Diversity Act, 2002
Section 36(4): [Union government to conduct assessment of environmental impact of that project which is likely to have adverse effect on biological diversity]

Activists were detained for a few hours for protesting along with some 1,000 farmers.

On being asked why villagers are protesting against land acquisition for the Yettinahole project in Tiptur tehsil, G.D. Shekar, Yettinahole Special Land Acquisition Officer, Tumkur, told LCW over phone: "Out of 33 villages in Tiptur, only seven villages are not allowing officials to conduct survey, primarily because land is being acquired from these villages for two other projects as well -- a bypass road project and national highway project -- besides Yettinahole. The villagers have asked for drinking water and fair compensation. Although the local people are good and might get convinced to give up their land, realtors are provoking them." On whether the government is offering them adequate compensation, Shekar said, "The land acquisition process is at a very nascent stage here. We are only conducting surveys at this stage; discussions will take place over the compensation amount later, and the villagers will be given time to file their complaints." 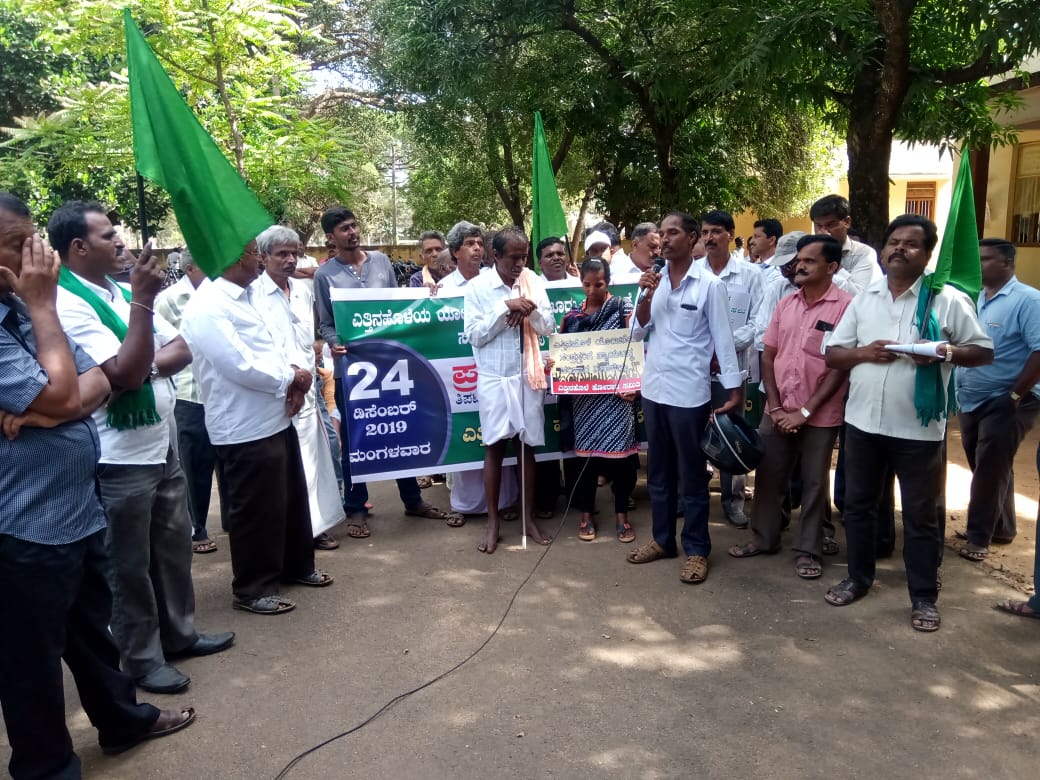