More than 100 farmers, along with women and children, in Nagaon district in central Assam have been protesting since January 29, 2021, against forced eviction from their lands. They have alleged that the Nagaon district administration, with the help of police and paramilitary forces, have tried to evict them illegally from their land for setting up a 15megawatt solar power plant at Mikir Bamuni Grant and Lalung Gaon under Samaguri revenue circle by Azure Power Forty Private Limited, a New Delhibased solar power generation company. According to them, the district administration has threatened the farmers, and the police have harassed and arrested some of them for trying to resist the eviction. In October 2020, the police arrested 14 farmers following a fracas with the security personnel of Azure Power. The clash broke out when police started destroying crops. In December 2020, four farmers were arrested on charges of assaulting police personnel. The farmers, however, have said that they were framed and arrested on false charges. After spending more than two months in jail, they got bail on February 22, 2021. The police also allegedly mercilessly beat up women who resisted the land acquisition proceedings. Several women were hurt. "They almost broke my hip with sticks. Not a single policewoman was present there," said Malini Doloi, who sustained serious injuries, in a news report. A 28yearold woman, identified as Champa Timungpi, suffered a miscarriage after the police allegedly kicked in her belly. In 2018, Assam Power Development Corporation Limited selected 38.4 hectares of farmland at Mikir Bamuni Grant and Lalung Gaon for setting up the solar power plant. The contract for the work was awarded to Azure Power in 2019. Subsequently, in March 2020, the power company started the process of land acquisition. The farmers, belonging to Karbi (Scheduled Tribe) and Adivasi communities, admitted that the circle officer of Samaguri had served them a notice for the land acquisition, but they say that not enough time was given to file any written objection. According to them, they received the notice on March 12, 2020, and were asked to register their grievances, if any, before the authorities on March 13. The farmers subsequently moved the Gauhati High Court against the acquisition of their land. The court stayed the eviction on June 24, 2020. But Azure Power appealed against this order, and a fresh notice was issued by the circle officer of Samaguri on July 15. On** **September 30, the Gauhati High Court directed the Nagaon administration to hand over the land to the power company. The farmers again filed a review petition at the Gauhati High Court, to which the court asked them to appeal to the lower courts to resolve the dispute. On October 6, a local court in Nagaon ordered the district administration and the police to not interfere since the land acquisition had become a civil dispute. However, a few days after this order, the company allegedly used bulldozers to destroy crops sown on the land by the 37 families. In May 2021, more than 150 academics, students, lawyers, activists and filmmakers condemned the deployment of CRPF personnel at Mikir Bamuni Grant in the middle of the COVID19 pandemic and demanded their withdrawal. They collected signatures to ask the authorities to stop the construction of the solar plant. Azure Power claims that the company has followed the due process of law while acquiring the land. It said in a statement that necessary permissions were taken and that all land purchases were made through private land deals as the land was originally granted to an erstwhile zamindar's family. The Karbis and Adivasis have been farming on the land for several decades and are solely dependent on it for their livelihood. They obtained possession rights over these lands in 1981 under the Assam (Temporarily Settled Areas) Tenancy Act, 1971. The Act allows a tenant who has held and cultivated a plot of land for more than three years to claim the right of occupancy.

Assam (Temporarily Settled Areas) Tenancy Act, 1971
Section 5 [Acquisition of occupancy rights]
Right to Fair Compensation and Transparency in Land Acquisition, Rehabilitation and Resettlement Act, 2013
Section 15: [Hearing of objections up to 60 days after the preliminary notification]; Section 21 [Notice to be issued to interested persons]
Scheduled Castes and Scheduled Tribes (Prevention of Atrocities) Act, 1989
Section 3(1)(g) [This sections makes wrongful dispossession of land of a member of SC or ST punishable]

Police officials and security personnel of Azure Power destroyed crops of farmers by running bulldozers over their farms. When the farmers resisted, they were arrested. Even women were beaten up. A pregnant woman suffered miscarriage after the police allegedly kicked her on the stomach. Women protesters were arrested without the presence of female police. 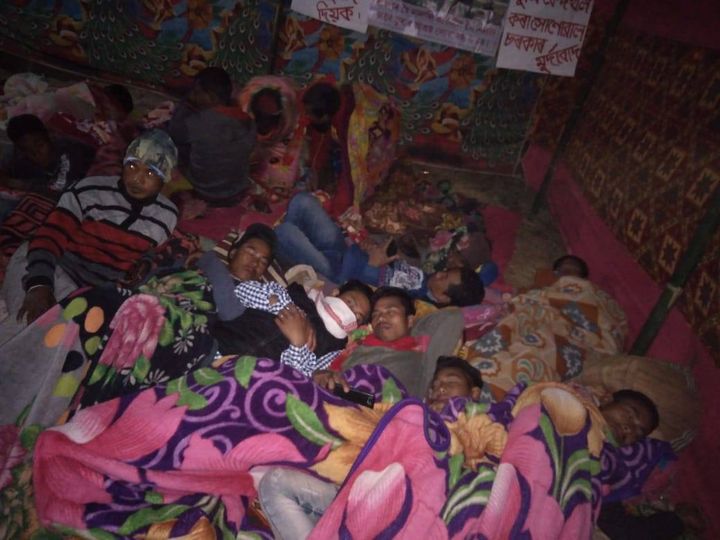