Before Rajarhat, a municipality in Greater Kolkata, was developed into a satellite township, it was one of the most fertile areas in West Bengal. Irrigated by Keshtopur, Bagjola and three other canals adjacent to them, Rajarhat was a wetland with a thriving farming system, where crops were grown thrice a year, and the farmers were sustainably equipped to farm. In AprilMay 1999, the Left Front government started acquiring close to 7,000 hectares of land by invoking the colonial Land Acquisition Act to set up the Rajarhat township. It was envisioned as a hotbed for corporate services and sprawling residential complexes. But in what has been described as a case of illegal landgrabbing, farmers allege that the authorities went door to door forcing the people to accept the land acquisition notice. Unwilling to give away their land, they were subjected to repeated intimidation and brutalitylocal goons allegedly attacked farmers and forced their hand to permit the acquisition. Many have also claimed to have received the notice of land acquisition after their lands were taken away. Besides the land grab, another contentious issue is the meagre compensation offered for the acquired land. In Patharghata village, most of the land was acquired for INR 3 lakhs as opposed to its actual market value of INR 6 lakhs, according to a report in Business Standard. In fact, a majority of the farmers refused the compensation offered. In 2000, a case was filed on behalf of the Rajarhat Krishijomi Raksha Committeea collective of the affected farmerschallenging the land acquisition and compensation process. They continue to demand their land back. On May 22, 2019, Land Conflict Watch approached the West Bengal Housing Infrastructure Development Corporation Limited for an update on the conflict via an email and a followup phone call but was unable to receive a response.

Many farmers were allegedly attacked by local goons.. 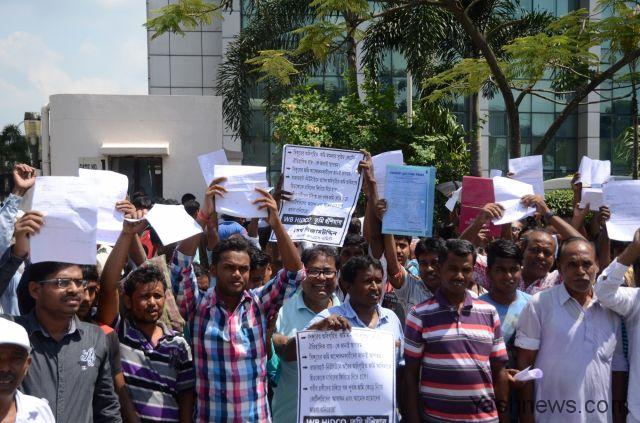