Almost two years after the allocation of INR 19.2 crore for restoration, Gangaram lake in Chanda Nagar, Hyderabad, has almost dried up. The amount was allocated in 2018 under Mission Kakatiya of the Telanagana government, which aims to revive and restore irrigation sources in the state. Under the mission, the lake was set to get a facelift with a walking track, a cycling track, sewage diversion system and an open gym. However, "the lake is surrounded by illegal constructions that were first observed by locals in 2016. That was when the people came together and formed Gangaram Lake Restoration Foundation (GLARE) to create awareness," Saiparasad Cherukuri, secretary, GLARE Foundation, told LCW. "Construction around the lake has reduced its catchment area and polluted the water," he said. Over the years, the polluted lake had become a breeding ground for mosquitoes. The water quality degaraded, emitting a stench. Growth of hyacinth was another problem. "The lake was a source of livelihood to the fisherfolk community in the area. With increasing pollution and vanishing aquatic life, fishing has been affected," Saiprasad said. The people have demanded the Greater Hyderabad Municipal Corporation (GHMC) authorities to control the lake's contamination due to untreated sewage and various effluents and demarcate the lake boundary with makrings and fence. According to Saiprasad, the lake's area has reduced from 110 acres to 6070 acres at present. However, plot owners who have allegedly encroached the lake approached the Telangana high court, stating that their lands were not in the FTL (full tank level) zone when they were purchased. Saiprasad refutes this claim because it is not possible "to claim a land under the water". The process of lake restoration was planned in two stages: sewage diversion followed by desilting. However, the work stopped due to growing illegal encroachments. Banners of private plots and fences started to crop up in and around the lake boundary as soon as the lake was emptied. People started using bulldozers to level the FTL land. FTL is the highest level up to which water can be stored in a lake/tank. "Gangaram lake is completely dried up as encroachers have taken to ground levelling," a resident, who does not wish to be named, told LCW. "The talk is that while half of the land will be converted to a lake, the other half would be used for real estate through government lobbying. A huge residential gated community, a politician's venture, may come up soon," he added. In June 2020, the Telangana high court, in a case similar to that of the Gangaram lake, directed officials to remove all constructions from the buffer zone surrounding the lake as they are clear encroachments. As of August 2020, the rejuvenation work for Gangaram lake was 50 per cent completed.

Ancient Monuments and Archaeological Sites and Remains Rules, 1959
Exact provision unknown as copy of the Act is unavailable. However, lands within the FTL, or full tank level, are not permitted to be used in a manner detrimental to the safety and existence of the tanks; grant of pattas for the land in the water spread area is prohibited; and pattas granted, if any, are only for limited use, such as grazing of cattle]
Greater Hyderabad Municipal Corporation Act, 1955
Section 112(17) [Matters to be provided for by the Municipal Corporation - the management and maintenance of all municipal water works, including lakes]
Ministry of Urban Development - Advisory on Conservation and Restoration of Water Bodies in Urban Areas, 2013
Part 7 Paragraph 3 [Suggested Steps in Lake Conservation - The shore-line of the water bodies should be properly fenced to protect it from encroachment. A well-planned awareness campaign should be conducted in the localities to highlight benefits to be gained from them. If any encroachment exists on the bank, it needs to be re-settled/relocated in consultation with the affected people] 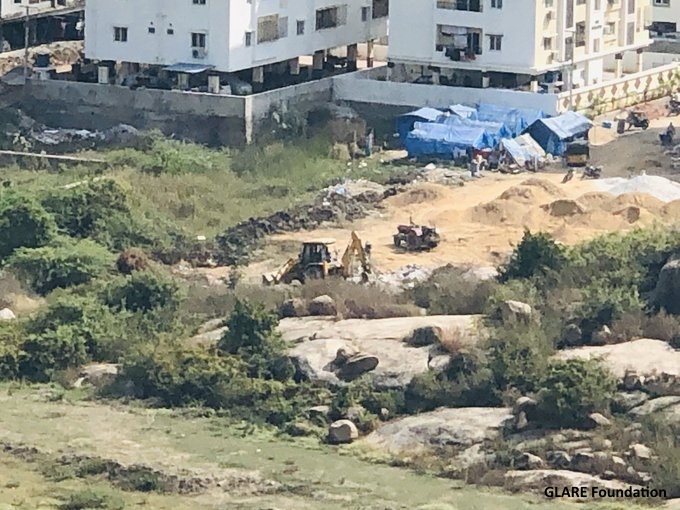