In June 2019, a group of officials, comprising members of the panchayat and revenue department and two policemen, reached Rainpur village with a JCB to demolish six houses, including one built under the Pradhan Mantri Awas Yojana. They demolished the houses without any notice, Hem Singh Markam, who lost his house, told LCW. Another resident informed LCW that while the police was threatening the residents, the officials started the demolition drive, claiming that the land is sarkari zameen (government land) and is meant for a cow shelter. The six houses belonged to people from the Gond tribe and Yadav and Chauhan communities. They say that they have been living and farming on the forestland for more than four generations. They claim to have submitted applications under the Forest Rights Act, 2006, multiple times but said that their applications were not processed and they did not even get acknowledgement receipts for their applications. Earlier too, in 2018, another house and farming land were allegedly destroyed by the authorities. Some of the affected people had filed a police complaint against the sarpanch (head of panchayat). They were not given a copy of the complaint either. After their houses were demolished, the six families lived in makeshift homes with tarpaulin sheets for a year, even during the monsoons. Only recently, they have made mud houses. During the demolition drive, their household goods were also damaged and foodgrains were stolen. Markam informed LCW that one of his family members lost the Transfer Certificate of 10th standard and could not get admission in school in 11th standard. When the families went to the district collectors office to protest, they were given verbal assurance that the houses would be rebuilt and that the administration would send them tarpaulin sheets, medical help and other necessary aid, but the families got no help. Only a nurse came to check on them during the monsoon season, says one of the residents. In the year following the demolition, the families have filed several police complaints and have attended multiple hearings. Our attendance is taken by the lawyer and he gives us a next date for the hearing. Nothing more happens, Markam says. In addition to them, there are currently 75 households that have not received titles for their land. A few months after the demolition, about 100 residents from the same village protested at the Pali block office, demanding receipt of their FRA applications. The block office finally gave them receipts, but their claims are yet to be processed. In October 2020, again about 100 people protested twice in front of the panchayat office, demanding receipt of their FRA applications. After daylong agitations, the authorities finally handed them the receipts.

Scheduled Tribes and Other Traditional Forest Dwellers (Recognition of Forest Rights) Act, 2006
Section 3(a) and (m) [Rights guaranteed under the Forest Rights Act]; Section 4 [Recognition and vesting of forest rights mentioned in Section 3, with Scheduled Tribe]
Scheduled Castes and Scheduled Tribes (Prevention of Atrocities) Act, 1989
Section 3(1)(v) [Wrongfully dispossessing a member of the Scheduled Tribe community of their land and interfering with the enjoyment of their land rights]
Ministry of Environment and Forests, Joint Forest Management: A Handbook
Table 16.1: [Responsibility of the Joint Forest Management Committee in the prevention of encroachment]; Provision 13.4: [The Executive Committee has the power to make arrangements to prevent encroachment]
Public Premises (Eviction of Unauthorised Occupants) Act, 1971
Section 4 [Requires the Estate Officer to issue a notice of show cause against the proposed eviction]; Section 5 [An order of eviction shall only be made after an opportunity has been given to the unauthorised occupant to show cause after a personal hearing]

Applications were submitted to claim recognition of forest rights under the Forest Rights Act, 2006.

Revenue department officials, along with the police, allegedly demolished six houses without prior notice. During the demolition drive, their household goods were damaged and foodgrains were stolen.

Korba Collector Kiran Kaushal did not give satisfactory responses to LCW's queries despite multiple calls and messages. Abhishek Sharma, sub divisional magistrate of Katghora, refused to comment saying he was on leave the day the researcher called.

Korba Collector Kiran Kaushal did not give satisfactory responses to LCW's queries despite multiple calls and messages. Abhishek Sharma, sub divisional magistrate of Katghora, refused to comment saying he was on leave the day the researcher called. 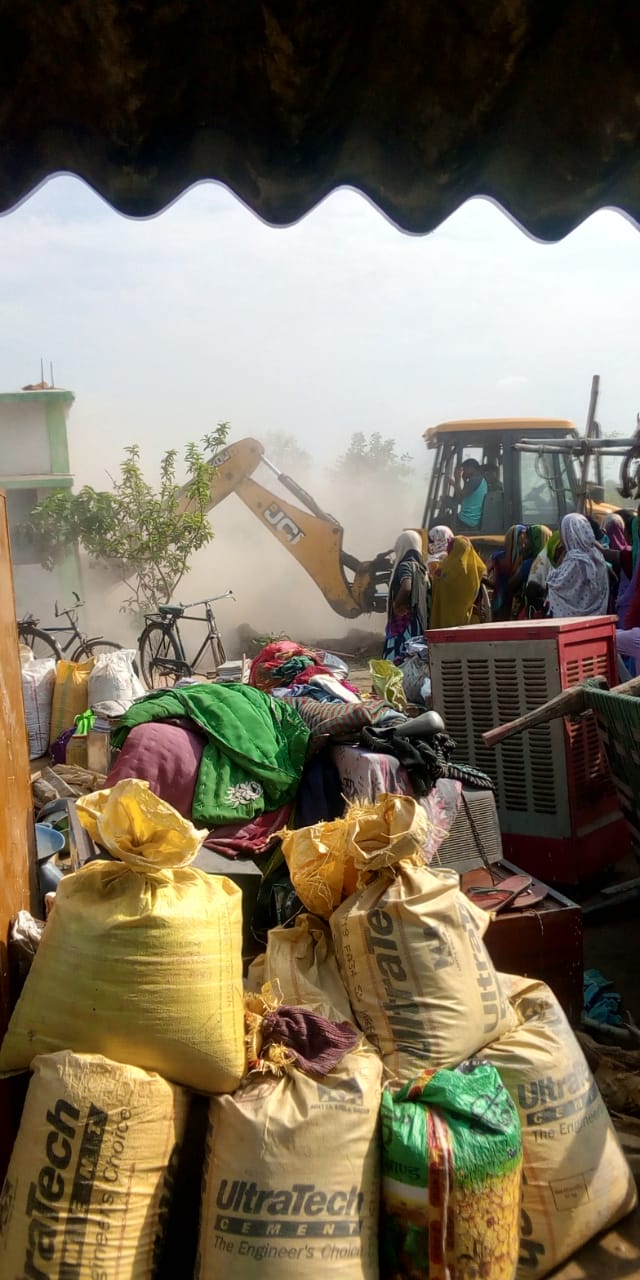